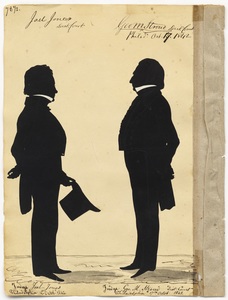 Gender:
Male
Born:
October 25, 1795
Died:
February 3, 1860
Home Town:
Coventry, CT
Later Residences:
Easton, PA
Wilkesbarre, PA
Philadelphia, PA
Marriage(s):
Eliza Perkins Sparhawk Jones (June 14, 1831)
Biographical Notes:
Joel Jones began to practice law in New Haven, CT but a family crisis forced him to move to Pennsylvania where his family had resettled. In 1822, Jones conducted an academy for an year and a half at Wilkes Barre, PA. He then moved to Easton, PA where he practiced as a lawyer. In 1830, he was appointed along with two other members of the Philadelphia bar to revise the state laws of Pennsylvania.

Jones was elected President of Girard College from 1847 to 1848. He was the author of Treatise on the Law of Land Office Title of Pennsylvania. He was a longtime member of both the Pennsylvania Historical Society and the American Philosophical Society. In honor of his achievements, Princeton gave him an honorary doctorate in 1848.

Records for the schools were sporadic, especially in the formative years of both institutions. If instructors kept comprehensive records for the Litchfield Female Academy or the Litchfield Law School, they do not survive. Researchers and staff have identified students through letters, diaries, family histories and genealogies, and town histories as well as catalogues of students printed in various years. Art and needlework have provided further identification of Female Academy Students, and Litchfield County Bar records document a number of Law School students. The history of both schools and the identification of the students who attended them owe credit to the early 20th century research and documentation efforts of Emily Noyes Vanderpoel and Samuel Fisher, and the late 20th century research and documentation efforts of Lynne Templeton Brickley and the Litchfield Historical Society staff.
CITATION OF ATTENDANCE:
Catalogue of the Litchfield Law School Hartford, CT: Press of Case, Tiffany and Company, 1849.
Contact Us