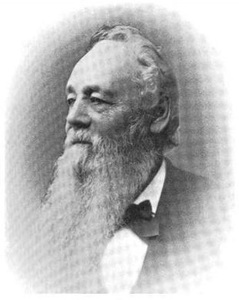 Gender:
Male
Born:
February 18, 1803
Died:
July 3, 1889
Home Town:
Williamstown, MA
Later Residences:
Utica, NY
Marriage(s):
Eliza Kirkland Bacon (October 23, 1828)
Susan Gillette Bacon (unknown)
Biographical Notes:
William Johnson Bacon was the son of Ezekial Bacon and Abigail Smith Bacon. His father was a prominent politician and lawyer, and had attended the Litchfield Law School in 1794. Bacon was born in Williamstown, Massachusetts in 1803 and he graduated from Hamilton College in 1822. He then attended the Litchfield Law School the following year. Bacon married twice in his lifetime. His first marriage was to Eliza Kirkland, in 1828. After Eliza's death in 1872, William's second marriage was to Mrs. Susan Sloan Gillette, but the date of their union is not known. Like his father, William Johnson Bacon was actively involved both with legal and political practices. Bacon was a Judge on the Supreme Court of New York from 1853 to 1870 as well as a member of the New York Legislature in both 1850 and 1861. ...He was a third generation United States Congressman serving from 1877 to 1879 and became a trustee of Hamilton College from 1856 until his death in 1889 in Utica, New York.
[more][less]
Education
Years at LLS:
1823
Other Education:
Graduated from Hamilton College in 1822.
Studied for a year in the law office of Joseph and Charles P. Kirkland.
Profession / Service
Profession:
Lawyer; Political Office
Admitted To Bar:
1824
Political Party:
Republican
Federal Posts:
U.S. Representative (NY) 1877-1879
State Posts:
Judge of the Supreme Court (NY) 1854-1870
State Representative (NY) 1850
Local Posts:
Attorney for the City (Utica, NY) 1837
Immediate Family (Why only immediate family?)
Related Objects and Documents
In the Ledger:

Records for the schools were sporadic, especially in the formative years of both institutions. If instructors kept comprehensive records for the Litchfield Female Academy or the Litchfield Law School, they do not survive. Researchers and staff have identified students through letters, diaries, family histories and genealogies, and town histories as well as catalogues of students printed in various years. Art and needlework have provided further identification of Female Academy Students, and Litchfield County Bar records document a number of Law School students. The history of both schools and the identification of the students who attended them owe credit to the early 20th century research and documentation efforts of Emily Noyes Vanderpoel and Samuel Fisher, and the late 20th century research and documentation efforts of Lynne Templeton Brickley and the Litchfield Historical Society staff.
CITATION OF ATTENDANCE:
Catalogue of the Litchfield Law School (Hartford, CT: Press of Case, Tiffany and Company, 1849), 19.
Secondary Sources:
Memorial biographies of New England historic genealogical society, 1853-1855, Volume 8, New England Historic Genealogical Society, Boston, 1907.
Contact Us