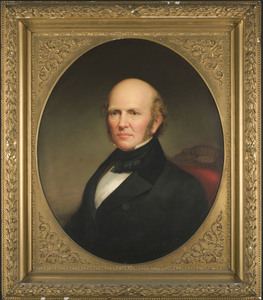 Gender:
Male
Born:
1800
Died:
January 22, 1858
Home Town:
Warren, RI
Later Residences:
Worcester, MA
Marriage(s):
Harriet Burling Kinnicutt (1827)
Biographical Notes:
Thomas Kinnicutt was the son of Thomas and Amy (Wightman) Kinnicutt. After graduating from the Litchfield Law School, he moved to Worcester, MA in 1825 where he established a legal practice. For a while he maintained a partnership with Hon. Isaac Davis.

Kinnicutt became a leader at the bar and one of the foremost citizens of his day. He was a representative to the General Court in 1835-37 and 1841-43, and speaker of the House of Representatives. He later served as a state senator from Worcester county, 1838-39; selectman in 1836; and trustee of the State Lunatic Hospital. From 1848 to the time of his death in 1858, he was judge of probate of this county. He was president of the Central Bank, and vice president of the Worcester County Institution for Savings and a member of the old ...Fire Society.

In the memoirs of the Fire Society, Hon. John D. Washburn says of him: "He had a refined and discriminating mind, but the controversies of the bar and the rugged offices of political life had little attraction for him; and his physical powers were never of the strongest. He was a man of winning presence, and his manners had 'that sweet attractive kind of grace' which was characteristic of the best specimens of the gentlemen of the old school. Hence, and especially from the air of moral purity which surrounded him and in which he always seemed to move, and the genial sympathy which diffused itself from and about him, he was a man greatly beloved and 'bore without abuse the grand old name of gentleman.'"

Kinnicutt married Harriet Burling, and they had two children.

Records for the schools were sporadic, especially in the formative years of both institutions. If instructors kept comprehensive records for the Litchfield Female Academy or the Litchfield Law School, they do not survive. Researchers and staff have identified students through letters, diaries, family histories and genealogies, and town histories as well as catalogues of students printed in various years. Art and needlework have provided further identification of Female Academy Students, and Litchfield County Bar records document a number of Law School students. The history of both schools and the identification of the students who attended them owe credit to the early 20th century research and documentation efforts of Emily Noyes Vanderpoel and Samuel Fisher, and the late 20th century research and documentation efforts of Lynne Templeton Brickley and the Litchfield Historical Society staff.
CITATION OF ATTENDANCE:
Litchfield Eagle, October 6, 1823.

Catalogue of the Litchfield Law School Hartford, CT: Press of Case, Tiffany and Company, 1849.
Contact Us