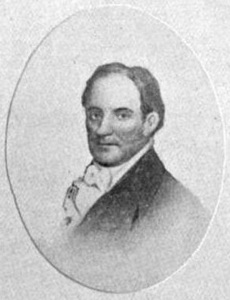 Gender:
Male
Born:
November 8, 1763
Died:
July 23, 1830
Home Town:
Farmington, CT
Later Residences:
Castleton, VT
Marriage(s):
Lucy Lathrop Langdon (April 7, 1789)
Biographical Notes:
Chauncey Langdon was the son of Ebenezer and Katherine (Green) Langdon. Langdon and his wife moved to Castleton, VT soon after their marriage. He became an active Federalist and maintained his own legal practice while being politically active in Vermont. In 1803 Langdon received an honorary degree at Middlebury College(in Vermont). In 1811, he worked as a trustee for the university until his death. Langdon was also an officer of the Vermont Bible Society.
Education
Years at LLS:
1787
Other Education:
Graduated from Yale College in 1787.
Profession / Service
Profession:
Lawyer; Political Office
Admitted To Bar:
1787
Training with Other Lawyers:
He studied with Judge Sylvester Gilbert of Hebron, CT.
Political Party:
Federalist
Federal Posts:
U.S. Representative (VT) 1815-1817
State Posts:
Register of Probate (VT) 1792-1794, 1796, 1813
Judge of Probate (VT) 1798-1799
State Representative (VT) 1813-1814, 1817, 1819-1820, 1822
Immediate Family (Why only immediate family?)
Related Objects and Documents
In the Ledger:

Records for the schools were sporadic, especially in the formative years of both institutions. If instructors kept comprehensive records for the Litchfield Female Academy or the Litchfield Law School, they do not survive. Researchers and staff have identified students through letters, diaries, family histories and genealogies, and town histories as well as catalogues of students printed in various years. Art and needlework have provided further identification of Female Academy Students, and Litchfield County Bar records document a number of Law School students. The history of both schools and the identification of the students who attended them owe credit to the early 20th century research and documentation efforts of Emily Noyes Vanderpoel and Samuel Fisher, and the late 20th century research and documentation efforts of Lynne Templeton Brickley and the Litchfield Historical Society staff.
CITATION OF ATTENDANCE:
[We are currently working to update and confirm citations of attendance.]
Secondary Sources:
Dexter, Franklin Bowditch. Biographical Sketches of the Graduates of Yale College with Annals of College History, Vol. 4. New York: Henry Holt and Company, 1907.
Contact Us