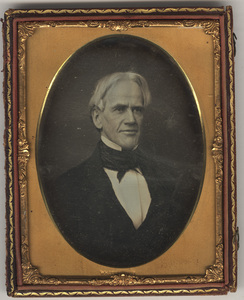 Ten years later he began a four year term as a State Senator. As a Senator, Horace Mann became increasingly interested in social issues. He supported legislation to prohibit the sale of alcohol and lottery tickets, and to support the creation of state hospitals for the insane. Mann was instrumental in leading Massachusetts to form the first state board of education.

Horace Mann’s interest in the standard of educational practices led him to give up law and his role in the Senate. He was appointed as the Secretary of the Massachusetts State ...Board of Education in 1837. Although the powers of the board were limited, it was able to affect public attitudes about school issues and to create public support for increasing the pay of teachers and improving their training through the founding of teacher-training schools.

In 1843, Horace Mann toured Europe to study educational conditions and methods. When he returned to the United States, he championed features of European education including the abolition of corporal punishment. He was opposed by conservator educators who believed in the practice and was attacked by church officials for advocating schools not be run by religious sects. However, these attacks drew public attention to school issues. Mann’s ideas were published in 12 annual reports which have become a record of the period of major educational reform in Massachusetts and the basis for a new school system throughout the entire country.

Horace Mann resigned as Secretary of the Massachusetts Board of Education in 1848 when he was elected to the U.S. House of Representatives to fill a vacancy caused by the death of John Quincy Adams. He served until 1853, when he became president of Antioch College (now Antioch University) in Yellow Springs, Ohio. It was a newly founded, non-sectarian, co-educational college which symbolized the many reforms proposed by Mann in his earlier positions.

Education
Years at LLS:
1821-1823
Other Education:
Attended Brown University in 1819.
Profession / Service
Profession:
Lawyer; Political Office
Admitted To Bar:
Norfolk in 1823
Training with Other Lawyers:
After studying at the Litchfield Law School he became a student with Hon. J.J. Fiske of Wrentham, MA.
Political Party:
Whig; Free-Soil
Federal Posts:
U.S. Representative (MA) 1848-1853
State Posts:
State Representative (MA) 1827-1833
State Senator (MA) 1833-1837
State Committees:
President of the State Senate from 1835-1837. Commissioner for the revision of the MA statures in 1835. Served as secretary to the Board of Education of MA from 1837-1848.
Immediate Family (Why only immediate family?)
Related Objects and Documents
In the Ledger:

Records for the schools were sporadic, especially in the formative years of both institutions. If instructors kept comprehensive records for the Litchfield Female Academy or the Litchfield Law School, they do not survive. Researchers and staff have identified students through letters, diaries, family histories and genealogies, and town histories as well as catalogues of students printed in various years. Art and needlework have provided further identification of Female Academy Students, and Litchfield County Bar records document a number of Law School students. The history of both schools and the identification of the students who attended them owe credit to the early 20th century research and documentation efforts of Emily Noyes Vanderpoel and Samuel Fisher, and the late 20th century research and documentation efforts of Lynne Templeton Brickley and the Litchfield Historical Society staff.
CITATION OF ATTENDANCE:
Litchfield Eagle, October 7, 1822 and October 6, 1823.

Catalogue of the Litchfield Law School Hartford, CT: Press of Case, Tiffany and Company, 1849.
Contact Us