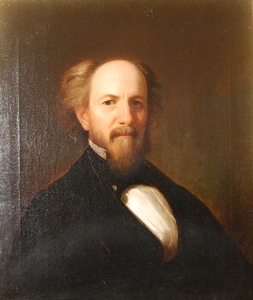 Adams attended Yale College in 1824 and then worked as a merchant in New York City from 1825 to 1828. From 1828 to 1833 he served as the editor of the Norwich Republican. He attended the Litchfield Law School in 1833 and passed the bar in 1834. He then went on to practice law in Cass County, Michigan from 1836 to 1838, and then in Harrisburgh, Pennsylvania from 1840 until 1844. John returned to Norwich, Connecticut in 1844 and established a law practice there. During his life, Adams also worked as an author and a politician. He wrote The Lost Hunter and Other Tales and served first in the Connecticut State House of Representatives ...from 1860 to 1863 and the Connecticut State Senate in 1864.

Records for the schools were sporadic, especially in the formative years of both institutions. If instructors kept comprehensive records for the Litchfield Female Academy or the Litchfield Law School, they do not survive. Researchers and staff have identified students through letters, diaries, family histories and genealogies, and town histories as well as catalogues of students printed in various years. Art and needlework have provided further identification of Female Academy Students, and Litchfield County Bar records document a number of Law School students. The history of both schools and the identification of the students who attended them owe credit to the early 20th century research and documentation efforts of Emily Noyes Vanderpoel and Samuel Fisher, and the late 20th century research and documentation efforts of Lynne Templeton Brickley and the Litchfield Historical Society staff.
CITATION OF ATTENDANCE:
Catalogue of the Litchfield Law School (Hartford, CT: Press of Case, Tiffany and Company, 1848), 24.
Secondary Sources:
Yale College. Biographical Sketches of the Class of 1824: Compiled from Authentic Documents, and Published for the benefit of the members. Norwalk, CT: A.H. Byington, Printer, 1855.
Contact Us