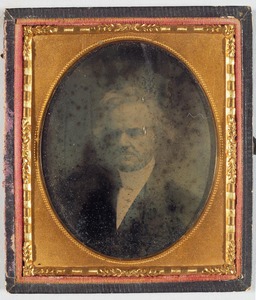 Gender:
Male
Born:
April 6, 1785
Died:
August 27, 1866
Home Town:
Litchfield, CT
Later Residences:
Newburyport, MA
Boston, MA
Baltimore, MD
Troy, NY
West Medford, MA
Biographical Notes:
John Pierpont was the son of James and Elizabeth (Collins) Pierpont and was the second of ten children. After graduating from Yale, he assisted Rev. Azel Backus in an academy at Bethlehem, CT for several months. In 1805, Pierpont moved to South Carolina where he worked as a tutor until 1809 in the household of William Alston, the father of Joseph Alston. He then returned to Litchfield in 1809. He and his wife had three sons and three daughters and their first son was named for William Alston.

Pierpont then moved to Newburyport, MA where he opened a law office and also published some poetry. He later established a dry goods business in Boston, MA with his brother-in-law Joseph L. Lord. They also attempted to open a branch in Baltimore, MD, but it failed in the War of 1812. While in ...Baltimore, MD, he published Airs of Palestine in 1816 which was regarded at the time as a great literary effort.

Rather than return to legal practice, Pierpont decided to become a minister. After graduation from Harvard Divinity School, he became the Pastor of Hollis Street Church in Boston, MA for the next twenty-six years. During this time, he also published two school readers, the first being The American Class Book, which was published in 1822 and the second, The National Reader, which was published in 1827. Both readers went through many editions and were the first American readers that included selections from Shakespeare.

Pierpont also published the Airs of Palestine and Other Poems (1840) and The Anti-Slavery Poems of John Pierpont (1843). There were some problems with his parish regarding his abolitionist and temperence views, and in 1845 Pierpont went to Troy, NY. He worked as a minister there until 1849. Pierpont then moved again, this time to West Medford, MA, where he again acted as a minister from 1849 to 1858.

During the Civil War, he acted as the Chaplain of the 22nd Massachusetts Regiment from September to November of 1861. He died at West Medford, MA. Pierpont was the grandfather of John Pierpont Morgan, and father of James Pierpont, the author of the poem "Jingle Bells," which would become the well known Christmas carol.

Records for the schools were sporadic, especially in the formative years of both institutions. If instructors kept comprehensive records for the Litchfield Female Academy or the Litchfield Law School, they do not survive. Researchers and staff have identified students through letters, diaries, family histories and genealogies, and town histories as well as catalogues of students printed in various years. Art and needlework have provided further identification of Female Academy Students, and Litchfield County Bar records document a number of Law School students. The history of both schools and the identification of the students who attended them owe credit to the early 20th century research and documentation efforts of Emily Noyes Vanderpoel and Samuel Fisher, and the late 20th century research and documentation efforts of Lynne Templeton Brickley and the Litchfield Historical Society staff.
CITATION OF ATTENDANCE:
Litchfield County Bar Association Records, Litchfield Historical Society, Helga J. Ingraham Memorial Library.