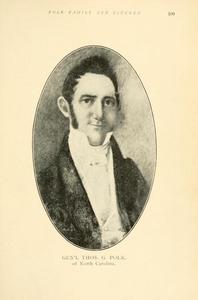 Gender:
Male
Born:
February 22, 1791
Died:
1869
Home Town:
Mecklenberg County, NC
Later Residences:
LaGrange, TN
Holly Springs, MD
Marriage(s):
Mary Trotter Polk (unknown)
Biographical Notes:
Thomas Gilchrist Polk was the son of William and Grizelda (Gilchrist) Polk. His father was a Colonel in the Revolutionary War, a Trustee of the University of North Carolina and had one county as well as three towns in North Carolina named after him.

Thomas is the eldest of his father's children. President James K. Polk was his second cousin. Although he was admitted to the bar, he was quite wealthy and never seriously pursued legal practice.

In 1826, Polk moved to Salisbury in Rown County, NC. While living there he married and Polk and his wife had six children. In 1832, he lost the race for Governor to David L. Swain.

Polk acted as the President of the Rowan chapter of the American Colonization Society and as Major General of the Militia. Like his father, he served ...as a Trustee of the University of North Carolina from 1831 to 1839. In 1838, he moved his family briefly to La Grange, TN. Two years later he moved again to Holly Springs, MD. He declined a nomination to run for Governor of Mississippi and an 1860 census reported that he was a farmer with extensive property and real estate. Polk died in Holly Springs, MD.
[more][less]

Records for the schools were sporadic, especially in the formative years of both institutions. If instructors kept comprehensive records for the Litchfield Female Academy or the Litchfield Law School, they do not survive. Researchers and staff have identified students through letters, diaries, family histories and genealogies, and town histories as well as catalogues of students printed in various years. Art and needlework have provided further identification of Female Academy Students, and Litchfield County Bar records document a number of Law School students. The history of both schools and the identification of the students who attended them owe credit to the early 20th century research and documentation efforts of Emily Noyes Vanderpoel and Samuel Fisher, and the late 20th century research and documentation efforts of Lynne Templeton Brickley and the Litchfield Historical Society staff.
CITATION OF ATTENDANCE:
Litchfield County Bar Association Records, 1811, Litchfield Historical Society, Helga J. Ingraham Memorial Library.