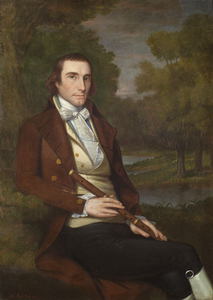 Gender:
Male
Born:
February 22, 1765
Died:
1829
Home Town:
New Milford, CT
Later Residences:
New Milford, CT
Poughkeepsie, NY
Marriage(s):
Ellen Buckley Ruggles (unknown)
Biographical Notes:
Philo Ruggles was the son of Lazarus and Hannah Ruggles. He established something of a family tradition for both his younger brother Herman and his son Henry would follow in his footsteps and later attend the Litchfield Law School. He was admitted to the Bar in 1791.

Ruggles opened a law office in New Milford which he continued until the year 1804, when he removed to Poughkeepsie, N. Y. He continued to practice law until 1825, when he moved to the city of New York. He there resumed and continued the practice of his profession until his death, which took place in 1829, at the age of 64.

He was elected to the CT General Assembly four times and was also a member for the county of Duchess, in the Legislature of New York.
Additional Notes:
In 1803 and 1804 Philo Ruggles was a member of the Committee of Examination for the Litchfield County Court admissions to the bar.
Education
Years at LLS:
1790
Profession / Service
Profession:
Lawyer; Political Office
Admitted To Bar:
1791
Training with Other Lawyers:
He continued his studies of the law in the office of his brother Samuel B. Ruggles.
State Posts:
State Representative (CT) 1796-1797, 1800-1802
State Representative (NY)
Local Posts:
Surrogate (Dutchess County, NY)
Immediate Family (Why only immediate family?)
Related Objects and Documents
In the Ledger:
Other:
Litchfield County, Litchfield County Court Papers by Subject: Admissions to the Bar

Records for the schools were sporadic, especially in the formative years of both institutions. If instructors kept comprehensive records for the Litchfield Female Academy or the Litchfield Law School, they do not survive. Researchers and staff have identified students through letters, diaries, family histories and genealogies, and town histories as well as catalogues of students printed in various years. Art and needlework have provided further identification of Female Academy Students, and Litchfield County Bar records document a number of Law School students. The history of both schools and the identification of the students who attended them owe credit to the early 20th century research and documentation efforts of Emily Noyes Vanderpoel and Samuel Fisher, and the late 20th century research and documentation efforts of Lynne Templeton Brickley and the Litchfield Historical Society staff.
CITATION OF ATTENDANCE:
Handwritten list on loose papers of LLS Students "prior to 1798," inside Catalogue of Litchfield Law School (Hartford, CT: Press of Case, Tiffany and Company, 1849), LHS - Notes him as having atttended in 1789 and 1791
Secondary Sources:
Loomis, Dwight and J. Gilbert Calhoun. The Judicial and Civil History of Connecticut. Boston: The Boston History Company, 1895.
Contact Us