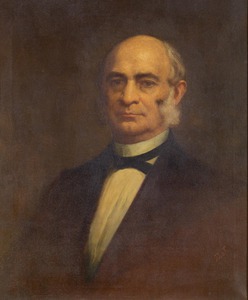 Gender:
Male
Born:
August 1, 1812
Died:
March 27, 1884
Home Town:
Rhinebeck, NY
Later Residences:
New York, NY
Marriage(s):
Anna Fox Schell (March 1873)
Biographical Notes:
Augustus Schell was the son of Christian and Elizabeth (Hughes) Schell. After his admission to the bar, Schell went to work at the firm of John Slosson. He later formed his own firm with Slosson in 1842 in New York City. This firm eventually became 'Schell, Slosson & Hutchins' and later 'Hutchins & Platt.' Schell became an expert in corporate law with his older brother Richard, who was a leader on Wall Street and became involved in various investments with Augustus. He was a close friend of Commodore Cornelius Vanderbilt and supported him in all of his railroad developments.

In 1862, Schell became the Director of the Hudson River Railroad. Five years later he served as the Director of the Lake Shore and Michigan Central Railroad. His great financial and legal acumen placed him on ...the board of many different railroad companies throughout his life. Schell was also an able director of several banks and insurance companies. He acted as the Vice President of the Union Trust Company and as the Chairman of the legal committee of the Union Telegraph Company.

Schell also maintained a strong interest in the political workings of New York City, NY. In 1852, he became the Chairman of the Tammany General Committee, but their candidate for governor lost to Horatio Seymour. From 1853 to 1855 he acted as the Chairman of the State of New York's Democratic Committee. He was a supporter of James Buchanan in 1856 and was rewarded for his loyalty in 1857 with post of Collector of the Port of New York.

After the Civil War, he reorganized Tammany Hall after "Boss" William M. Tweed's downfall. In 1872, he succeeded Tweed as Grand Sachem and held this position until his death. That same year there was a second attempt to nominate him for Governor but this was prevented by the work of Samuel Jones Tilden. From 1872 to 1876, he worked as the Chairman of the National Democratic Committee and managed Horace Greeley's presidential campaign. Schell ran for both mayor and state representative but lost both races.

In addition, Schell also pursued some charitable and academic interests. He was Chaiman of the Executive Committee of the New York Historical Society for nineteen years, and acted as the President twice. Schell also served as the President of the New York Institute for the Blind from 1866 until his death. During the panic of 1873, his brother Richard's firm failed but Augustus remained financially sound. He was worth several million dollars at his death but had no children and left all of his money to his nieces and nephews. Schell died in New York City.

Records for the schools were sporadic, especially in the formative years of both institutions. If instructors kept comprehensive records for the Litchfield Female Academy or the Litchfield Law School, they do not survive. Researchers and staff have identified students through letters, diaries, family histories and genealogies, and town histories as well as catalogues of students printed in various years. Art and needlework have provided further identification of Female Academy Students, and Litchfield County Bar records document a number of Law School students. The history of both schools and the identification of the students who attended them owe credit to the early 20th century research and documentation efforts of Emily Noyes Vanderpoel and Samuel Fisher, and the late 20th century research and documentation efforts of Lynne Templeton Brickley and the Litchfield Historical Society staff.
CITATION OF ATTENDANCE:
Catalogue of the Litchfield Law School (Hartford, CT: Press of Case, Tiffany and Company, 1848), 24.
Secondary Sources:
Schell, Francis. Memoir of the Hon. Augustus Schell. New York: Private Printing, 1885.
Contact Us