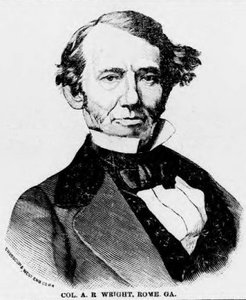 Gender:
Male
Born:
June 16, 1813
Died:
March 31, 1891
Home Town:
Wrightsboro, GA
Later Residences:
Cassville, GA
Rome, GA
Marriage(s):
Elizabeth Richardson Wright (1832)
Adaline Allman Wright (ca. 1847)
Biographical Notes:
Augustus Romaldus Wright spent his boyhood in Augusta as well as on a farm six miles from Appling, GA. Wright attended the Franklin College of Arts and Sciences (which would later become the University of Georgia in Athens) where he was a member of the Phi Kappa Literary Society. He then attended the Litchfield Law School before being admitted the State Bar of Georgia in 1835.

He spent his first year of legal practice in Crawfordville, GA. He moved to Cassville, Cherokee County, GA and practiced law there from 1836 to 1842. Wright lost his first bid for Congress in 1842, and was later defeated a second time when he ran as a Whig. From 1842 until 1849, Wright served as a judge of the superior court of the Cherokee circuit.

His first wife died in 1845 and Wright married ...the daughter of Nelson Allman of Chattoga County, GA shortly after that.

During the Civil War, Wright staunchly supported the Southern cause and in 1860 raised a legion for the Confederate Army around Atlanta, GA. From 1861 to 1862, he served as a Colonel in the 38th Georgia Infantry of the Confederate Army (Wright's Legion). He also served in the Confederate Congress for the duration of the war. Initially, he supported a powerful Confederate government and military, but as the war progressed, he became alarmed at the emergency measures taken by the government beginning in 1862. Although Wright supported a strong, large army, he sought one of volunteers rather than draftees. He became a virulent defender of personal and property rights.

As early as February 1864, Wright began to discuss pursuing peace with President Lincoln and the North. After the war ended, he remained involved within the shaping of Georgia politics. In 1877, he acted as a member of the Georgia Constitutional Convention and helped to set the laws for Georgia.

He died at his home, Glenwood, and is buried in Myrtle Hill Cemetery in Rome, GA. Wright had seventeen children between his two marriages.
[more][less]
Education
Years at LLS:
1832
Other Education:
Educated at schools in Appling and Athens, GA before attending Franklin College. He also attended the University of Georgia, but never graduated.
Profession / Service
Profession:
Lawyer; Political Office
Admitted To Bar:
Georgia in 1835 and Rome, GA in 1855
Training with Other Lawyers:
After the closing of the Litchfield Law School he continued his law education with William Tracy Gould of Augusta, GA.
Political Party:
Democrat
Federal Posts:
U.S. Representative (GA) 1857-1859
Confederate Congress
Federal Committees:
Delegate to the Harrisburg Convention in 1827.
State Posts:
Judge of the Superior Court on the Cherokee County Circuit (GA) 1842-1849
Judge of the Superior Court (GA) 1855-1857
State Committees:
Delegate to the GA Secession Convention and the Confederate Secession Convention.
Immediate Family (Why only immediate family?)
Related Objects and Documents
In the Ledger:

Records for the schools were sporadic, especially in the formative years of both institutions. If instructors kept comprehensive records for the Litchfield Female Academy or the Litchfield Law School, they do not survive. Researchers and staff have identified students through letters, diaries, family histories and genealogies, and town histories as well as catalogues of students printed in various years. Art and needlework have provided further identification of Female Academy Students, and Litchfield County Bar records document a number of Law School students. The history of both schools and the identification of the students who attended them owe credit to the early 20th century research and documentation efforts of Emily Noyes Vanderpoel and Samuel Fisher, and the late 20th century research and documentation efforts of Lynne Templeton Brickley and the Litchfield Historical Society staff.
CITATION OF ATTENDANCE:
Catalogue of the Litchfield Law School Hartford, CT: Press of Case, Tiffany and Company, 1848.
Secondary Sources:
Warner, Ezra J. and W. Buck Yearns. Biographical Register of the Confederate Congress. Louisiana: Lousiana State University Press, 1975.
Contact Us