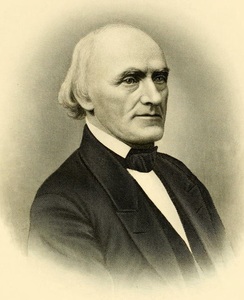 Other Name:
Charles Clarke Chapman
Gender:
Male
Born:
June 21, 1799
Died:
August 7, 1869
Home Town:
Newtown, CT
Later Residences:
New Haven, CT
Hartford, CT
Marriage(s):
Sarah Tomlinson Chapman (January 3, 1821)
Biographical Notes:
Charles Chapman was the son of Litchfield Law School student Asa Chapman and Mary Perry Chapman. Like his father, Charles Chapman studied at the Litchfield Law School and completed his study under Judge Williams from New Haven. He married Sarah Tomlinson from Newtown, CT when he was twenty one years old. After being admitted to the bar, he began a practice in New Haven, CT but moved to Hartford, CT in 1832. He had a large legal practice and established a reputation as an excellent criminal lawyer.

Along with being a thriving lawyer, Chapman was heavily involved in politics and was a leading man in the Andrew Jackson Campaign in 1827-28. By 1833 he became a leader in the Conservative Party, eventually identifying himself a member of the Whig Party. Chapman ...was elected to the legislature to represent Hartford three times and became a member of the Thirty Second Congress. Charles Chapman was frequently commended for his demeanor and presence in the court room, proving to be an excellent criminal lawyer who had a way with the jury. He died in Hartford, CT and is interred in Cedar Hill Cemetery.
[more][less]
Additional Notes:
Editor of New England Review 1832
Education
Years at LLS:
1818
Profession / Service
Profession:
Lawyer; Political Office
Admitted To Bar:
Connecticut in 1820
Training with Other Lawyers:
After attending the Litchfield Law School Charles completed his law studies with Chief Justice Williams.
Political Party:
Whig
Federal Posts:
U.S. Attorney for the District of CT (CT) 1841-1848
U.S. Representative (CT) 1851-1853
State Posts:
State Representative (CT) 1840, 1847-1848, 1862, 1864
Immediate Family (Why only immediate family?)
Related Objects and Documents
In the Ledger:

Records for the schools were sporadic, especially in the formative years of both institutions. If instructors kept comprehensive records for the Litchfield Female Academy or the Litchfield Law School, they do not survive. Researchers and staff have identified students through letters, diaries, family histories and genealogies, and town histories as well as catalogues of students printed in various years. Art and needlework have provided further identification of Female Academy Students, and Litchfield County Bar records document a number of Law School students. The history of both schools and the identification of the students who attended them owe credit to the early 20th century research and documentation efforts of Emily Noyes Vanderpoel and Samuel Fisher, and the late 20th century research and documentation efforts of Lynne Templeton Brickley and the Litchfield Historical Society staff.
CITATION OF ATTENDANCE:
Houghton, Josiah. "LLS Law Notebook 1817-1818." Litchfield Law School Collection, Series 1, Subseries 1, Litchfield Historical Society. Available online at https://archive.org/stream/35102011793091#page/n11/mode/2up.