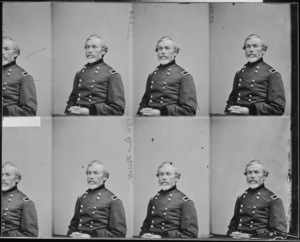 Wessels became a career military officer after graduating from West Point in 1833, and served in the Mexican-American War. During the Civil War, Wessells led the defense of Union fortifications in Plymouth, North Carolina. He was imprisoned for a time after surrendering the town, and later served as Commissary General of Prisoners. ...Wessells returned to Litchfield after retiring from the Army in 1871.

Records for the schools were sporadic, especially in the formative years of both institutions. If instructors kept comprehensive records for the Litchfield Female Academy or the Litchfield Law School, they do not survive. Researchers and staff have identified students through letters, diaries, family histories and genealogies, and town histories as well as catalogues of students printed in various years. Art and needlework have provided further identification of Female Academy Students, and Litchfield County Bar records document a number of Law School students. The history of both schools and the identification of the students who attended them owe credit to the early 20th century research and documentation efforts of Emily Noyes Vanderpoel and Samuel Fisher, and the late 20th century research and documentation efforts of Lynne Templeton Brickley and the Litchfield Historical Society staff.
CITATION OF ATTENDANCE:
1820 Litchfield Female Academy Summer Session Catalogue (Vanderpoel, Emily Noyes. More Chronicles of A Pioneer School From 1792 to 1833. Cambridge, MA: The University Press, 1927).