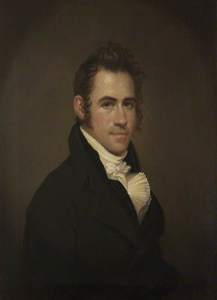 Other Name:
John P. Cushman
Gender:
Male
Born:
March 8, 1784
Died:
September 16, 1848
Home Town:
Pomfret, CT
Later Residences:
Troy, NY
Marriage(s):
Maria Tallmadge Cushman (1812)
Biographical Notes:
John Paine Cushman was the son of Judge Isaac and Sarah (Paine) Cushman. His older brother Seth who was born in 1782 was a lawyer, so it was first decided that John should remain on the farm. However, Cushman prepared for college at Plainfield Academy with John Adams, a Yale graduate of 1795. He entered Yale with the class of 1806 but an inflammation of the eyes forced him to leave college for a year. After attending the Litchfield Law School, Cushman entered the office of William Bliss of Troy, NY and became close friends with William L. Marcy (Marcy served as U.S. Senator and Governor of New York, and as the U.S. Secretary of War and U.S. Secretary of State).
Not long afterwards, Cushman made Troy, NY his permanent home, he married Maria Tallmadge ...in 1812. She was the oldest daughter of Colonel Benjamin and Maria Tallmadge of Litchfield, CT and a student at the Litchfield Female Academy. They had eight children together.
He briefly considered leaving the law to enter the Presbyterian Ministry but entered politics instead. Cushman was also involved with academic institutions, acting as a Regent of New York University from 1830 to 1842 as well as a Trustee of Union College from 1833 until his death. Upon his death in 1848, his Litchfield Law School classmate John Allen Collier gave a speech in his memory at the opening of the U.S. Supreme Court and the court adjourned in his honor.
[more][less]
Additional Notes:
On February 21, 1824, Cushman's father-in-law Benjamin Tallmadge wrote to him regarding a sexual affair between his female house servant and a Litchfield Law School student.

“I do not remember whether I informed you that our black Girl Mary had gone to N. York, where I presume She may commemorate our law School in due time, by exhibiting a Mongrel Mink.”

Tallmadge Collection
Education
Years at LLS:
1808
Other Education:
In preparation for college he studied at the Plainfield Academy and attended Yale College in 1806, but left a year later with inflammaiton of the eyes.
Profession / Service
Profession:
Lawyer; Political Office
Admitted To Bar:
1808 in Litchfield County Court
Training with Other Lawyers:
Prior to attending the Litchfield Law School he read the law with Judge Zephaniah Swift of Windham, CT. After completing his studies at the Litchfield Law School he read the law briefly with Abraham Van Vechten in Albany, NY.
Political Party:
Federalist
Federal Posts:
U.S. Representative (NY) 1817-1819
State Posts:
Judge of Third Circuit Court (NY) 1838
Judge of State Supreme Court (NY) 1838-1844
Local Posts:
Recorder (Troy, NY) 1834
Immediate Family (Why only immediate family?)
Related Objects and Documents
In the Ledger:
Other:
Litchfield County, Litchfield County Court Papers by Subject: Admissions to the Bar

Records for the schools were sporadic, especially in the formative years of both institutions. If instructors kept comprehensive records for the Litchfield Female Academy or the Litchfield Law School, they do not survive. Researchers and staff have identified students through letters, diaries, family histories and genealogies, and town histories as well as catalogues of students printed in various years. Art and needlework have provided further identification of Female Academy Students, and Litchfield County Bar records document a number of Law School students. The history of both schools and the identification of the students who attended them owe credit to the early 20th century research and documentation efforts of Emily Noyes Vanderpoel and Samuel Fisher, and the late 20th century research and documentation efforts of Lynne Templeton Brickley and the Litchfield Historical Society staff.
CITATION OF ATTENDANCE:
Ledger. "Journals of the Barr - Litchfield County." Litchfield Historical Society.; Catalogue of the Litchfield Law School (Hartford, CT: Press of Case, Tiffany, and Company, 1849), 7.