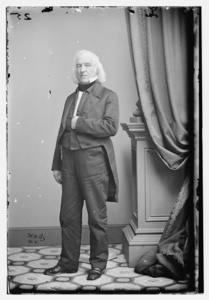 Other Name:
Daniel S Dickinson; Daniel Stevens Dickinson
Gender:
Male
Born:
September 11, 1800
Died:
April 12, 1866
Home Town:
Goshen, CT
Later Residences:
Guilford, NY
Binghamton, NY
New York, NY
Marriage(s):
Lydia Knapp Dickinson (1822)
Biographical Notes:
Daniel Stephen Dickinson was the son of Daniel T. and Mary (Caulkins) Dickinson. His family moved to New York in 1806 and settled in Guilford, NY where his father became a farmer of moderate means. As a child, Dickinson was apprenticed to a clothier and studied Latin and mathematics on his own.
For five years he taught in public and private schools, studying law and surveying at the same time. He also read law in the office of Clark and Clapp in Norwich, NY. During this time Dickinson married. Unlike many law students, Dickinson attended the Law School as a married man and without having gone to college first. He was admitted to the bar the following year and served as a lawyer and postmaster in his hometown of Guilford, NY for a short time.
He ...soon moved to Binghamton, NY in 1831 where he became a prominent member of the Democratic party. He rose through the local and state ranks. In 1844 he attended the Democratic National Covention in New York and cast his vote for James Polk. Later that year, Dickinson was appoointed by Gov. Bouck to fill the Senate seat of N.P. Tallmadge. He was reelected in 1845 and served for six years.
As a Senator, Dickinson spoke on the annexation of Texas, the occupation of Oregon, the Mexican War and offered opposition to the Wilmot Proviso. He retired from Congress in 1851 and returned to his law practice. When President Franklin Pierce nominated him to be the Collector of the Port of New York in 1853, he declined, hoping instead to receive the Democratic nomination for President in 1860. He did not receive enough votes at the convention to be nominated.
When South Carolina seceeded from the Union, he felt the North was responsible and strove for reconciliation. After Fort Sumter, however, Dickinson vigorously supported the Union government and made hundreds of speeches encouraging young men to enlist. Later, Dickinson sought a Republican nomiantion to the U.S. Senate but lost. He declined an appointment to the Northwest Boundary Commission and a seat on the Court of Appeals. In 1864, he was a delegate to the Union Convention, but lost the candidacy for Vice President. He died in New York City.
[more][less]
Education
Years at LLS:
1827
Profession / Service
Profession:
Lawyer; Political Office
Admitted To Bar:
New York in 1828
Training with Other Lawyers:
He read the law in the office of Clark and Clapp in Norwich, CT.
Political Party:
Democrat
Federal Posts:
U.S. Senator (NY) 1845-1851
U.S. Attorney for the Southern District of New York (NY) 1865-1866
Federal Committees:
Chairman of the Finance Committee from 1849-1850. Member of the Committee on Manufactures from 1845 - 1848. And a member of the Committee on Private Land Claims from 1849-1850.
State Posts:
State Senator (NY) 1837-1840
Lt. Governor (NY) 1843-1844
Attorney General (NY) 1862-1863
Local Posts:
Postmaster (Guilford, NY) 1827-1832
Immediate Family (Why only immediate family?)
Related Objects and Documents
In the Ledger:

Records for the schools were sporadic, especially in the formative years of both institutions. If instructors kept comprehensive records for the Litchfield Female Academy or the Litchfield Law School, they do not survive. Researchers and staff have identified students through letters, diaries, family histories and genealogies, and town histories as well as catalogues of students printed in various years. Art and needlework have provided further identification of Female Academy Students, and Litchfield County Bar records document a number of Law School students. The history of both schools and the identification of the students who attended them owe credit to the early 20th century research and documentation efforts of Emily Noyes Vanderpoel and Samuel Fisher, and the late 20th century research and documentation efforts of Lynne Templeton Brickley and the Litchfield Historical Society staff.
CITATION OF ATTENDANCE:
[We are currently working to update and confirm citations of attendance.]
Secondary Sources:
Dickinson, John S., ed. Speeches, Correspondence, etc. of the Late Daniel S. Dickinson of NY. New York: G.P. Putnam & Son, 1867.
Contact Us