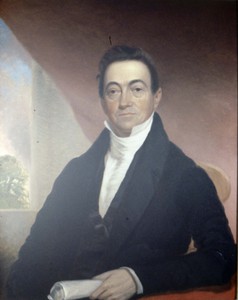 Gender:
Male
Born:
November 8, 1780
Died:
September 15, 1846
Home Town:
Cheshire, CT
Later Residences:
New Haven, CT
Chesire, CT
Marriage(s):
Eudocia Hull Foot (1782-1849) (1803)
Biographical Notes:
Samuel Augustus Foot was the son of Rev. John Foot, a minister in Cheshire, Connecticut and Abigail Hall, the daughter of John Hall, Esq. also of Cheshire. He was the youngest member of the Yale Class of 1797, entering at the age of only thirteen. He studied at the Litchfield Law School at the relatively young age of seventeen. However, due to poor health and headaches he found to be exacerbated by studying, he abandoned the study of the law to take up a more "active" profession.

Foot left Litchfield for New Haven, Connecticut and found employment there in the shipping trade centered around Long Wharf. He became a West India Trader and went on many voyages for his health. The War of 1812 Embargo Act destroyed his business and Foot returned to his father's home in Cheshire where ...he spent the rest of his life working as both a farmer and a politician.

Foot was very active in the public life of Connecticut. He was involved in the Toleration Party which wanted a new state constitution. He ran for Governor of Connecticut in 1824 but was defeated. While a United States Senator, he introduced a resolution (called the Foot Resolution) regarding the sale of public lands which led to the famous Webster-Hayne debate.

He resigned from Congress in 1834 to run again for the Governor of Connecticut, this time successfully. He was not reelected however and finally retired from politics. He died in Cheshire in September, 1846.

Foot married Eudocia Hull in 1803 and the couple had seven children. One son, John Alfred Foot, also attended the Litchfield Law School and became a politician. Another son, Andrew Hull Foot (also spelled Foote), attended West Point and later joined the Navy where he served with distinction. He was an outspoken abolitionist and served as a rear admiral during the American Civil War until his sudden death in 1863.
[more][less]
Additional Notes:
On April 13, 1819, Catharine Beecher wrote to Samuel Foote about Theodosia Deveaux Hastings and William Woodbridge Petit's wedding:

“The Mr. Petit that married Theodosia was originally from Marietta, Ohio. They were married at our house & I like Petit much -- tho’ he is an odd sort of genius -- in some things. He will be a very kind & attentive husband & in my last letter from Detroit, Theo’ says she is ‘as healthy & happy as she can well be’ which is some consolation for her being so far & so long from us. I fear it will be some years before I see her again & I feel the separation very much for she was a lovely girl & very dear to me.”

In that same letter, Catharine also wrote about a planned trip to Maine and Boston with her “mother’s sister Lucy” [Porter].

“She ...is a lovely girl about my age & has spent the winter here. She will be married next fall to Mr. John Brace & will settle here which will be a great comfort to mama & all of us…"

Records for the schools were sporadic, especially in the formative years of both institutions. If instructors kept comprehensive records for the Litchfield Female Academy or the Litchfield Law School, they do not survive. Researchers and staff have identified students through letters, diaries, family histories and genealogies, and town histories as well as catalogues of students printed in various years. Art and needlework have provided further identification of Female Academy Students, and Litchfield County Bar records document a number of Law School students. The history of both schools and the identification of the students who attended them owe credit to the early 20th century research and documentation efforts of Emily Noyes Vanderpoel and Samuel Fisher, and the late 20th century research and documentation efforts of Lynne Templeton Brickley and the Litchfield Historical Society staff.
CITATION OF ATTENDANCE:
[We are currently working to update and confirm citations of attendance.]
Secondary Sources:
Foote, Abram W. Foote History & Genealogy, Vol. 1. Rutland, VT: Marble City Press - The Tuttle Company, 1907.; Day, Thomas and James Murdock. Brief Memoirs of the Class of 1797. New Haven, CT: B.L. Hamlen, 1848.
Contact Us