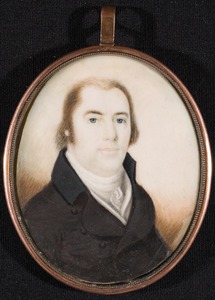 Gender:
Male
Born:
1757
Died:
1804
Home Town:
Woodbury, CT
Later Residences:
Fort Stoddert, AL
Marriage(s):
Ruth Marvin Kirby (March 17, 1784)
Biographical Notes:
Ephraim Kirby was the great-grandson of Joseph Kirby who emigrated from Warwickshire to Hartford in the early seventeenth century. He was educated at Yale, but left without a degree. He served in the cavalry during the Revolution and was wounded thirteen times.

In 1787, Yale gave him an honorary Master of Arts degree. He practiced law in Litchfield and was in the Connecticut Legislature from 1791 to 1801, afterwards serving as a director of the Western Reserve in Ohio. In 1789, Kirby compiled the first volume of law reports in America, those of the Superior Court of Connecticut. In 1797, Kirby and others successfully petitioned for setting off a new township that, in 1798, would be called Lawsville (what remains is the Liberty township).

President Jefferson appointed Kirby ...as first Superior Court Judge of the Mississipi Territory on 6th April 1804. He went directly to his new post, Fort Stoddert, on the Alabama River north of Spanish-held Mobile and near the present Mount Vernon. In this sparsely settled wilderness, he began the foundation of a new court system for what would become the state of Alabama. He lived only a few months, dying of fever while planning to return to his family. He left a wife and eight children in faraway Connecticut. His grave at old Fort Stoddert has never been found.
[more][less]