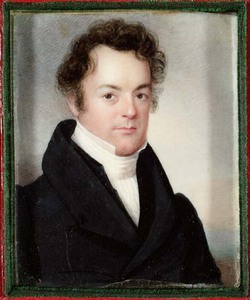 Gender:
Male
Born:
June 21, 1792
Died:
November 8, 1856
Home Town:
Norwich, CT
Later Residences:
Rochester, NY
Litchfield, CT
Marriage(s):
Clarissa Deming Perkins (April 20, 1817)
Biographical Notes:
Charles Perkins was the son of Captain Andrew and Elizabeth (Taylor) Perkins. While in Litchfield, he met his future wife, Clarissa Deming, who was the daughter of prominent Litchfield merchant Julius Deming. After their marriage, the couple moved to Norwich, CT where Perkins established a legal practice. In 1836, they moved to Rochester, NY for about two years where Perkins attempted to begin a land business. In 1828, Perkins and his family returned to Litchfield, CT. His wife later died there in 1837 and he never remarried. Perkins died while traveling abroad in London, England.
Education
Years at LLS:
1813
Other Education:
Prepared for college at Bacon Academy in Colchester, CT by John Adams and graduated from Yale College in 1813.
Profession / Service
Profession:
Lawyer; Business
Immediate Family (Why only immediate family?)
Related Objects and Documents
In the Ledger:

Records for the schools were sporadic, especially in the formative years of both institutions. If instructors kept comprehensive records for the Litchfield Female Academy or the Litchfield Law School, they do not survive. Researchers and staff have identified students through letters, diaries, family histories and genealogies, and town histories as well as catalogues of students printed in various years. Art and needlework have provided further identification of Female Academy Students, and Litchfield County Bar records document a number of Law School students. The history of both schools and the identification of the students who attended them owe credit to the early 20th century research and documentation efforts of Emily Noyes Vanderpoel and Samuel Fisher, and the late 20th century research and documentation efforts of Lynne Templeton Brickley and the Litchfield Historical Society staff.
CITATION OF ATTENDANCE:
Litchfield County Bar Association Records, 1813, Litchfield Historical Society, Helga J. Ingraham Memorial Library.