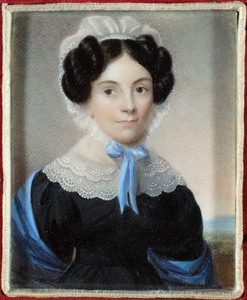 Other Name:
Clarissa Deming
Gender:
Female
Born:
December 21, 1795
Died:
1837
Home Town:
Litchfield, CT
Marriage(s):
Charles Perkins (April 20, 1817)
Biographical Notes:
Clarissa Deming Perkins was born on December 21, 1795 to Julius Deming and Dorothy Champion Deming of Litchfield, Connecticut. She attended the Litchfield Female Academy from 1809 through 1811. On April 20, 1817 she married a lawyer from Norwich, Connecticut named Charles Perkins, and they had seven children. She was described as "devoutly religious" and involved in benevolent work. It was said that she was "devoted to the beauty of good works as the opportunity of their fulfillment came to her. Foreign Missions had an especial appeal, and in her parlor always stood the large chest to be filled with garments to be sent to the Hawaiian Islands (Deming-Perkins Family Memorial, Litchfield Historical Society Archives)." In 1837 Clarissa passed away.
Additional Notes:
Primary sources for Clarissa Deming Perkins are located in the Litchfield Female Academy collection, Series 2: Student Papers, Records, and Documents, Folder 74.
Education
Years at LFA:
1809-1811
Profession / Service
Profession:
Social Activist
Immediate Family (Why only immediate family?)
Related Objects and Documents
In the Ledger:

Records for the schools were sporadic, especially in the formative years of both institutions. If instructors kept comprehensive records for the Litchfield Female Academy or the Litchfield Law School, they do not survive. Researchers and staff have identified students through letters, diaries, family histories and genealogies, and town histories as well as catalogues of students printed in various years. Art and needlework have provided further identification of Female Academy Students, and Litchfield County Bar records document a number of Law School students. The history of both schools and the identification of the students who attended them owe credit to the early 20th century research and documentation efforts of Emily Noyes Vanderpoel and Samuel Fisher, and the late 20th century research and documentation efforts of Lynne Templeton Brickley and the Litchfield Historical Society staff.
CITATION OF ATTENDANCE:
Clarissa Deming received a prize of merit in 1811 while attending the Litchfield Female Academy (Litchfield Historical Society - Litchfield Female Academy collection).