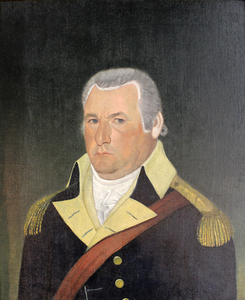 Other Name:
Maj. Gen. David Smith; Gen. David Smith; Maj. David Smith
Gender:
Male
Born:
December 2, 1747
Died:
October 16, 1814
Home Town:
New London, Ct
Later Residences:
Litchfield, CT
Plymouth, CT
Marriage(s):
Sally Atwater Smith (unknown)
Ruth Hitchcock Smith (unknown)
Biographical Notes:
David Smith served as an officer in the Revolutionary War, attaining the rank of Major General (although one source lists him as a Major in the Continental Army and a General in the Connecticut militia). He is listed as an original member of the Society of the Cincinnati, from Connecticut. After the war, Smith became a successful shopkeeper.
Additional Notes:
The Connecticut Historical Society holds a number of orderly books written by a David Smith, officer in the Connecticut Line, who is likely the same David Smith who later settled in Litchfield.
Profession / Service
Profession:
Military; Business
Immediate Family (Why only immediate family?)
Related Objects and Documents
In the Ledger:
Secondary Sources:
"Members of the Society of the Cincinnati, original, hereditary and honorary; with a brief account of the society's history and aims," William Sturgis Thomas, 1929