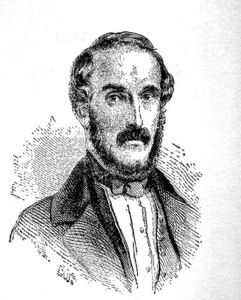 Gender:
Male
Born:
November 28, 1805
Died:
October 12, 1852
Home Town:
Shrewsbury, NJ
Later Residences:
New York, NY
Biographical Notes:
John Lloyd Stephens was the son of Benjamin L. Stephens, one of the wealthiest men in New York City, and his wife Clemence Lloyd. He was not greatly interested in the practice of law and in 1834 went on a sea voyage which his doctor had suggested might ease an affliction of the throat from which he suffered. He sailed to Europe and passed the next two years travelling in Southern and Eastern Europe. Stephens wrote many letters home of his exploits and in 1837 published his first travel book. He was known affectionately by friends and family as "the American traveler."

In 1839, Stephens was sent on a diplomatic mission to Central America and traveled all over Guatemala, but he never found the government to which he had been accredited. The British artist Frederick Catherwood was traveling ...with him and they studied ruins in Honduras, Guatemala and the Yucatan. Stephens became a prominent American Explorer of the time, recording the history of each place he traveled to. In 1841, he published another travel book based on his experiences titled Incidents of Travel in Central America. The first two volumes were published in 1841 with plates by Catherwood and two more volumes were published in 1843.

As an avid traveler with a great interest in quicker transportation, Stephens became a major promoter of steam navigation. He became a sponsor of the Ocean Steam Navigation Company and started a line to Bremen, Germany in 1847. This was the first line to take advantage of U.S. government subsidies for carrying mails. Stephens was also an active supporter of the Hudson River Railroad. His last great project started in 1849, when he helped to establish the Panama Railroad. He first served as the Vice President and later as the President, spending two years in Panama to oversee the project before returning to New York City in the spring of 1852. Stephens died only shortly afterwards. A monument was erected to him at the highest point of the Panama Railroad when it was opened in 1855.

Incidents of Travel in Egypt, Arabia Petraea, and the Holy Land (1837)

Incidents of Travel in Greece, Turkey, Russia and Poland (1838)

Education
Years at LLS:
1822-1824
Other Education:
Graduated from Columbia College in 1822 and received his Masters Degree from Columbia in 1828.
Profession / Service
Profession:
Arts; Political Office
Admitted To Bar:
1825
Training with Other Lawyers:
He read the law with Daniel Lord before attending the Litchfield Law School.
Political Party:
Democrat
Immediate Family (Why only immediate family?)
Related Objects and Documents
In the Ledger:

Records for the schools were sporadic, especially in the formative years of both institutions. If instructors kept comprehensive records for the Litchfield Female Academy or the Litchfield Law School, they do not survive. Researchers and staff have identified students through letters, diaries, family histories and genealogies, and town histories as well as catalogues of students printed in various years. Art and needlework have provided further identification of Female Academy Students, and Litchfield County Bar records document a number of Law School students. The history of both schools and the identification of the students who attended them owe credit to the early 20th century research and documentation efforts of Emily Noyes Vanderpoel and Samuel Fisher, and the late 20th century research and documentation efforts of Lynne Templeton Brickley and the Litchfield Historical Society staff.
CITATION OF ATTENDANCE:
Litchfield Eagle, October 6, 1823.