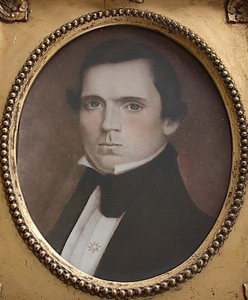 Other Name:
Henry Wilbourne Stevens
Gender:
Male
Born:
May 6, 1788
Died:
September 2, 1823
Home Town:
Canaan, CT
Later Residences:
Wilson Hill, AL
Marriage(s):
Sarah Sterret Stevens (unknown)
Biographical Notes:
Henry Wilburne Stevens was the son of Andrew and Cynthia (Brownell) Stevens. He was educated at the Litchfield Law School and was admitted to the bar in 1811. In 1814, after practicing law in Litchfield County for a few years Stevens headed south for Mobile. His move however, coincided with a need for more men in the military at the end of the Ware of 1812 and Stevens enlisted.

Stevens served as a private under Captain Nathan H. Luse's Company of Infantry, which was commanded by Lieutenant Colonel David Neilson in the Mississippi Territory. He was enlisted from January 2, 1815 through March 31, 1815.

After being discharged Stevens briefly practiced law in the Natchez District with William E. Parker, a fellow veteran of the war. In 1816 he moved to Montgomery County, Alabama ...and there became the county's first justice of the peace, as well as register of the orphans court. In the next few years Stevens married Sally Brooks Sterrett, a recent widow of Robert Sterrett, and mother of three children. The exact date of their marriage is unknown.

Henry Stevens became a justice of the of the newly established Cahawba County court in 1818. At the time of his death he worked as a lawyer in Wilson Hill, Dallas County, AL. Stevens and his wife had three children of their own. He died in Bibb County, AL.
[more][less]
Education
Years at LLS:
1811
Profession / Service
Profession:
Lawyer; Political Office
Admitted To Bar:
1811 in Litchfield County Court
Local Posts:
Judge of the County Court (Montgomery County, AL) 1816
Immediate Family (Why only immediate family?)
Related Objects and Documents
In the Ledger:
Other:
Litchfield County, Litchfield County Court Papers by Subject: Admissions to the Bar

Records for the schools were sporadic, especially in the formative years of both institutions. If instructors kept comprehensive records for the Litchfield Female Academy or the Litchfield Law School, they do not survive. Researchers and staff have identified students through letters, diaries, family histories and genealogies, and town histories as well as catalogues of students printed in various years. Art and needlework have provided further identification of Female Academy Students, and Litchfield County Bar records document a number of Law School students. The history of both schools and the identification of the students who attended them owe credit to the early 20th century research and documentation efforts of Emily Noyes Vanderpoel and Samuel Fisher, and the late 20th century research and documentation efforts of Lynne Templeton Brickley and the Litchfield Historical Society staff.
CITATION OF ATTENDANCE:
Litchfield County Bar Association Records, 1810, Litchfield Historical Society, Helga J. Ingraham Memorial Library.

Lewis, Herbert J. "A Conneceticut Yankee in Early Alabama: Henry Wilbourne Stevens and the Founding of Ordered Society, 181401823" The Alabama Review.
Contact Us