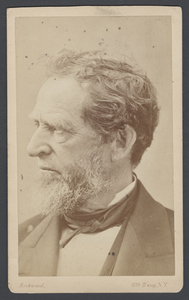 Gender:
Male
Born:
June 12, 1804
Died:
May 25, 1887
Home Town:
Stanford, NY
Later Residences:
New York, NY
Marriage(s):
Jane McClellan Sutherland (May 12, 1834)
Biographical Notes:
Josiah Sutherland, Jr. was the son of Josiah and Abigail (Dunkin) Sutherland. He graduated from Union College in 1824 and afterwards studied law in the office of Samuel G. Huntingdon of Waterford, NY and then in the office of Bushnell & Stebbins of Hudson, NY. Josiah was admitted to the bar in 1829 but moved to South Carolina for a year to improve his heath. Upon returning north, he entered into a partnership with Robert H. Morris in Livingston, NY. Morris was a former Mayor and Recorder of New York City. In 1831, Sutherland was appointed District Attorney of Columbia County, an office he held for over a decade.

In 1838, He moved to Hudson, NY and continued to practice law. Sutherland was elected to U.S. Congress in 1851 for one term. Afterwards he moved to New York City in 1857 and ...continued to practice law. He became an Associate Justice
of the New York State Supreme Court in 1857 and held the position until 1871. Sutherland immediately became presiding Judge of the Court of General Session from 1872 to 1878. At this point he retired from judicial life and resumed his legal practice. He died in New York City on May 25, 1887.

Records for the schools were sporadic, especially in the formative years of both institutions. If instructors kept comprehensive records for the Litchfield Female Academy or the Litchfield Law School, they do not survive. Researchers and staff have identified students through letters, diaries, family histories and genealogies, and town histories as well as catalogues of students printed in various years. Art and needlework have provided further identification of Female Academy Students, and Litchfield County Bar records document a number of Law School students. The history of both schools and the identification of the students who attended them owe credit to the early 20th century research and documentation efforts of Emily Noyes Vanderpoel and Samuel Fisher, and the late 20th century research and documentation efforts of Lynne Templeton Brickley and the Litchfield Historical Society staff.
CITATION OF ATTENDANCE:
Catalogue of the Litchfield Law School Hartford, CT: Press of Case, Tiffany and Company, 1848.
Contact Us