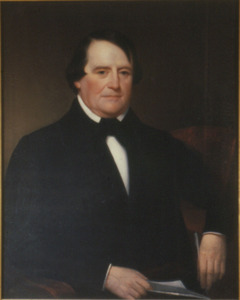 In May of 1824, ...the Connecticut General Assembly appointed Beers, along with his colleagues Thomas Day and Lemuel Whitman (both attorneys) to a committee whose purpose was to reprint the Revised Statutes of the state. They were given the power to edit for errors in the previous edition (printed 1821) and to update any changes to the laws, and improve the Index. This was published in November of the same year.

On September 23, 1807, Beers married Belinda Webster of Litchfield, Connecticut. The couple had five children, two of whom attended the Litchfield Female Academy: Julia Maria Beers and Horatio Preston Beers, who died at the age of 14. Another son, Henry A. Beers, attended the Hartford High School and later Yale College, where he later became a professor. Beers himself died in Litchfield on September 9, 1863.
[more][less]
Education
Years at LLS:
1803
Profession / Service
Profession:
Lawyer; Political Office; Business
Admitted To Bar:
1805 in Litchfield County Court
State Posts:
State's Attorney (CT) 1820-1825
State Representative (CT) 1820-1823
State Senator (CT) 1822-1823
Commissioner of the School Fund (CT) 1824
Clerk for the State House of Representatives (CT) 1821
State Committees:
Speaker of the House of Representatives in 1823
Immediate Family (Why only immediate family?)
Related Objects and Documents
In the Ledger:
Other:
Litchfield County, Litchfield County Court Papers by Subject: Admissinos to the Bar

Records for the schools were sporadic, especially in the formative years of both institutions. If instructors kept comprehensive records for the Litchfield Female Academy or the Litchfield Law School, they do not survive. Researchers and staff have identified students through letters, diaries, family histories and genealogies, and town histories as well as catalogues of students printed in various years. Art and needlework have provided further identification of Female Academy Students, and Litchfield County Bar records document a number of Law School students. The history of both schools and the identification of the students who attended them owe credit to the early 20th century research and documentation efforts of Emily Noyes Vanderpoel and Samuel Fisher, and the late 20th century research and documentation efforts of Lynne Templeton Brickley and the Litchfield Historical Society staff.
CITATION OF ATTENDANCE:
Catalogue of the Litchfield Law School, Hartford, CT: Press of Case, Tiffany and Company, 1849, 5.

Cothren, William. History of Ancient Woodbury, Connecticut, From the First Indian Deed in 1659 to 1879. Woodbury, CT: Published by William Cothren, 1879.