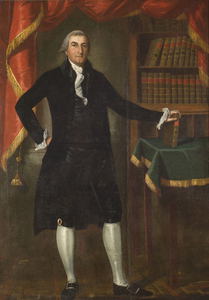 He married Susannah Bull on May 1, 1782. They had five children. Tracy's four daughters all attended the Litchfield Female Academy and all married graduates of the Litchfield Law School.

Tracy was an ardent Fedralist and was elected to the Senate from Connecticut following the resignation of Jonathan Trumbull. He served as Connecticut’s Senator in the United States Senate from 1796 to 1807. He was known for his keen wit and sharp sense of humor.

Tracy was a widely respected attorney, major general, and congressman, who went on ...to serve in the Senate for 11 years, from 1796 to 1807. As a senator, he was an active leader, serving on several committees and as president pro tempore in the Senate. In December of 1803, the Senate formed a special committee to consider official action against impeached Judge John Pickering of New Hampshire. Tracy served as its chairman and was the principal author of the rules and procedures for holding the impeachment trial. He was the first senator buried in the Congressional Cemetery.
[more][less]
Education
Years at LLS:
1778
Other Education:
Graduated from Yale College in 1778.
Profession / Service
Profession:
Lawyer; Political Office; Agriculture
Admitted To Bar:
Litchfield, CT in 1781
Political Party:
Federalist
Federal Posts:
U.S. Representative (CT) 1793-1796
U.S. Senator (CT) 1796-1807
Federal Committees:
Speaker of the House of Representatives in 1793. President pro tempore of the U.S. Senate in 1799 and 1800. Chairman of the Committee on Claims from 1793-1796.
State Posts:
State Representative (CT) 1788-1793
State's Attorney for Litchfield County (CT) 1794-1799
Immediate Family (Why only immediate family?)
Related Objects and Documents
In the Ledger:

Records for the schools were sporadic, especially in the formative years of both institutions. If instructors kept comprehensive records for the Litchfield Female Academy or the Litchfield Law School, they do not survive. Researchers and staff have identified students through letters, diaries, family histories and genealogies, and town histories as well as catalogues of students printed in various years. Art and needlework have provided further identification of Female Academy Students, and Litchfield County Bar records document a number of Law School students. The history of both schools and the identification of the students who attended them owe credit to the early 20th century research and documentation efforts of Emily Noyes Vanderpoel and Samuel Fisher, and the late 20th century research and documentation efforts of Lynne Templeton Brickley and the Litchfield Historical Society staff.
CITATION OF ATTENDANCE:
Handwritten list on loose papers of LLS Students "prior to 1798," inside Catalogue of Litchfield Law School Hartford, CT: Press of Case, Tiffany and Company, 1849.