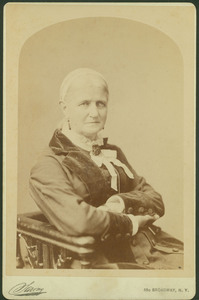 Gender:
Female
Born:
1812
Died:
1897
Home Town:
West Sutton, MA
Later Residences:
Lawrenceburg, IN
Indianapolis, IN
Brooklyn, NY
Marriage(s):
Henry Ward Beecher (1837)
Biographical Notes:
In 1812, Eunice Bullard White was born in West Sutton, Massachusetts. She married Henry Ward Beecher in 1837, and moved to Indiana with her husband immediately after her marriage. Henry Beecher was later to become a well-known Presbyterian minister, and for the first ten years of his career he would serve two churches in Indiana. The first church he served was the First Presbyterian Church in Lawrenceburg, Indiana, on the banks of the Ohio River. Indiana had become a state just two decades earlier, and it still had the rawness of a newly settled territory. While Eunice Beecher enjoyed the comforts of her life back East, she was excited and more than willing to embark with her new husband to this unfamiliar territory in order to support him in his ministry.

This enthusiasm and eagerness ...would soon fade to disappointment as she realized that a minister’s wife did not have the dignity and respect associated with the same position back home, and that she was expected to fill many demanding roles, none of which were familiar to her. Her disappointment with Indiana was apparent in her writing of "From Dawn to Daylight; or, The Simple Story of a Western Home" The novel centered on Mr. and Mrs. George and Mary Herbert, who traveled to Indiana to start a new life through the ministry. This novel, published by a minister’s wife, was a thinly disguised autobiography of Beecher’s own experiences in this unfamiliar land. Not only were her new roles as a bride, a mother, and a minister’s wife difficult to adjust to, but the land itself proved to have an influence on Beecher’s rather discontented outlook on this challenging lifestyle.

In 1847, after ten years in Indiana, the Beechers left Indianapolis for Brooklyn, New York. Twelve years later, Beecher published From Dawn to Daylight, which caused such a sensation that it was effectively banned in Indianapolis, because of what citizens felt was a negative portrayal of themselves and their city. The novel was quite the contrary, with honest and frank descriptions of the city and the land. In fact, after her move back East, Beecher referred to their term in Indianapolis as being “a very happy home – for many reasons the happiest we ever knew"

(This information was taken from the website Our Land, Our Literature created by Ball State University.)

She continued to write articles, chiefly on domestic subjects, to various periodicals. Some of her articles were published in book form. Eunice Beecher stood by her husband faithfully during his sensational adultery trial in 1874. She died in 1897.
[more][less]
Immediate Family (Why only immediate family?)
Related Objects and Documents
In the Ledger:
Contact Us