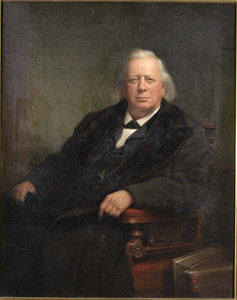 Gender:
Male
Born:
June 24, 1813
Died:
1887
Home Town:
Litchfield, CT
Later Residences:
Cincinnati, OH
Brooklyn, NY
Lawrenceburg, IN
Indianapolis, IN
Marriage(s):
Eunice Bullard Beecher (1837)
Biographical Notes:
Henry Ward Beecher, son of the Reverend Lyman Beecher and Roxana Foote Beecher of Litchfield, Connecticut, attended Sarah Pierce's Female Academy in 1824. At the age of 13, Lyman moved his family to Boston, and Henry began attending the Mount Pleasant Institute in Amherst, Massachusetts. After completing his studies at Mount Pleasant, Henry began his studies at Amherst College, and graduated in 1832. Henry then joined his family in Cincinnati, Ohio where he began to prepare for the ministry at Lane Seminary. After completing his studies, he married Eunice Bullard, who he had met in Amherst, and the couple moved to Lawrenceburg, Indiana where Henry began his career and the couple began their family that would include 11 children. Two years after their move to Lawrenceburg, they relocated to ...Indianapolis where Henry pursued better pay. After struggling to make ends meet he accepted a job offer in Brooklyn, New York in 1847 where he became very well known for his anti-temperance, anti-slavery, and pro-woman's suffrage sermons. Beecher's fame on the lecture circuit led to his becoming editor of several religious magazines, and he received large advances for a novel and for a biography of Jesus.

He was originally part of the free soil movement but eventually became a Republican. In 1860 Henry went down South and purchased a slave, "pinky," for $900 and brought her up to his congregation in Brooklyn. After a sermon and imitating a slave auctioneer "pinky" was freed. In 1927 she returned to the parish to talk about what happened. Her name, now married, was Mrs. Rose War Hunt.

In the highly publicized scandal known as the Beecher-Tilton Affair he was tried on charges that he had committed adultery with a friend's wife, Elizabeth Tilton. In 1870, Elizabeth had confessed to her husband, Theodore Tilton, that she had had a relationship with Henry Ward Beecher. Tilton was then fired from his job at The Independent because of his editor's fears of adverse publicity. Theodore and Henry both pressured Elizabeth to recant her story, which she did, in writing.

Henry Ward Beecher had publicly denounced Woodhull's advocacy of free love. She published a story in her paper (Woodhull and Claflin's Weekly) on November 2, 1872, claiming that America's most renowned clergyman was secretly practicing the free-love doctrines which he denounced from the pulpit. The story created a national sensation. As a result, Woodhull was arrested in New York City and imprisoned for sending obscene material through the mail. The Plymouth Church held a board of inquiry and exonerated Beecher, but excommunicated Mr. Tilton in 1873.

Tilton then sued Beecher. The trial began in January 1875, and ended in July when the jurors deliberated for six days but were unable to reach a verdict. His wife loyally supported him throughout the ordeal.

A second board of inquiry was held at Plymouth Church and this body also exonerated Beecher. Two years later, Elizabeth Tilton once again confessed to the affair and the church excommunicated her. Despite this Beecher continued to be a popular national figure. However, the debacle split his family. While most of his siblings supported him, Isabella Beecher Hooker openly supported one of his accusers.

Henry Ward Beecher died of a cerebral hemorrhage on March 8, 1887. Brooklyn, still an independent city, declared a day of mourning. The state legislature recessed, and telegrams of condolence were sent by national figures, including President Cleveland. His funeral procession to Plymouth Church -- led by a Black commander of the William Lloyd Garrison Post in Massachusetts and a Virginia Confederate general and former slaveholder, marching arm in arm -- paid tribute to what Beecher helped accomplish. Henry Ward Beecher was laid to rest in Brooklyn's Green-Wood Cemetery on March 11, 1887, survived by his wife Eunice, and four of the nine children born to them: Harriet, Henry, William, and Herbert.


[more][less]
Quotes:
"Litchfield streets thronged with young gentlemen and ladies...filling the golden air with laughter or low converse which unlaughing then, made life musical forever after."
Regarding Litchfield at sunset
Emily Noyes Vanderpoel, Chronicles of a Pioneer School from 1792 to 1833, Being the History of Miss Sarah Pierce and Her Litchfield School (1903)
Education
Years at LFA:
1824
Other Education:
Attended Mount Pleasant Institute
Graduated from Amherst College in 1832
Profession / Service
Profession:
Educator; Religious Calling
Immediate Family (Why only immediate family?)
Related Objects and Documents
In the Ledger:

Records for the schools were sporadic, especially in the formative years of both institutions. If instructors kept comprehensive records for the Litchfield Female Academy or the Litchfield Law School, they do not survive. Researchers and staff have identified students through letters, diaries, family histories and genealogies, and town histories as well as catalogues of students printed in various years. Art and needlework have provided further identification of Female Academy Students, and Litchfield County Bar records document a number of Law School students. The history of both schools and the identification of the students who attended them owe credit to the early 20th century research and documentation efforts of Emily Noyes Vanderpoel and Samuel Fisher, and the late 20th century research and documentation efforts of Lynne Templeton Brickley and the Litchfield Historical Society staff.
CITATION OF ATTENDANCE:
1824 Litchfield Female Academy Winter Session Catalogue (Vanderpoel, Emily Noyes. More Chronicles of A Pioneer School From 1792 To 1833. Cambridge, MA: The University Press, 1927).
Contact Us