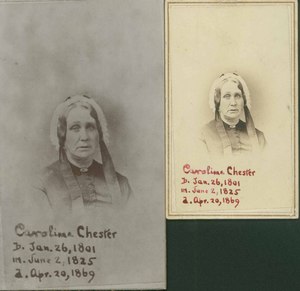 In June 1816, Chester and fellow Litchfield Female Academy students Susan Rockwell and Miss Sanford hired a carriage for an afternoon drive. While passing Tapping Reeve's house on South Street, Chester realized they had another passenger, Litchfield Law Student John Robbins Pitt, who was playing a joke on the group.

"In turning around saw sitting on the back of the carriage Mr. Pitt, I was astonished that a person whom I imagined possessed so much dignity would condescend to be seen in such a degraded situation, ...but what was my surprise when he cried out in a voice resembling some low bred country clown -- 'Don't whip behind.' Miss R______ immediately stopped the carriage & he jumped off..."

Records for the schools were sporadic, especially in the formative years of both institutions. If instructors kept comprehensive records for the Litchfield Female Academy or the Litchfield Law School, they do not survive. Researchers and staff have identified students through letters, diaries, family histories and genealogies, and town histories as well as catalogues of students printed in various years. Art and needlework have provided further identification of Female Academy Students, and Litchfield County Bar records document a number of Law School students. The history of both schools and the identification of the students who attended them owe credit to the early 20th century research and documentation efforts of Emily Noyes Vanderpoel and Samuel Fisher, and the late 20th century research and documentation efforts of Lynne Templeton Brickley and the Litchfield Historical Society staff.
CITATION OF ATTENDANCE:
Caroline Chester kept a diary while attending the Female Academy in 1815 (Vanderpoel, Emily Noyes.Chronicles of A Pioneer School From 1792 to 1833. Cambridge, MA: The University Press, 1903).

A "Miss Chester" is mentioned in Charlotte Smith's 1816 diary. This entry may refer to Charoline Chester Knickerbocker (Connecticut Historical Society).