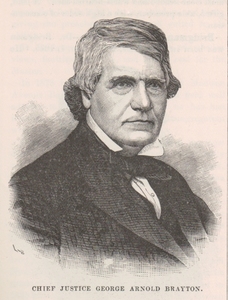 Brayton prepared for college at Kent Academy, and then continued on to study at Brown University. After graduating from Brown in 1824, he studied at the law office of Judge Albert C. Green the following year. He then went on to study the law at the the Litchfield Law School in 1825, and, after completing his studies, returned to his hometown of Warwick, Rhode Island where he began to practice law.

On November 1, 1831 Brayton married Celia Greene Clarke, also of Warwick, and the couple had two daughters. ...After his marriage, Brayton began a prominent judicial career. He was an active member of the New England Genealogical and Historical Society in 1847. Ten years prior to his death he received an honorary LLD from Brown College. He passed away in East Greenwich, Rhode Island.
[more][less]
Quotes:
Epitaph:
"He was from 1843 to 1868 one of the associate Justices and from 1868 to 1874 the Chief Justice of the Supreme Court of Rhode Island.
Upright, learned, faithful, he performed his duties with a diligence, a patience, a wisdom and an integrity which won the confidence and gratitude of his fellow citizens, and gained for him an honored name in jurisprudence."
Brayton Cemetery, Warwick, RI
Education
Years at LLS:
1825-1827
Other Education:
Attended the Kent Academy and Graduated from Brown University in 1824.
Profession / Service
Profession:
Lawyer; Political Office
Admitted To Bar:
1827
Training with Other Lawyers:
Office of Albert C. Greene, 1824-1825
State Posts:
State Representative (RI) 1832
Associate Justice of the Supreme Court (RI) 1843-1868
Chief Justice of the Supreme Court (RI) 1868-1874
Local Posts:
Clerk for the Town (Warwick, RI) 1834
Immediate Family (Why only immediate family?)
Related Objects and Documents
In the Ledger:

Records for the schools were sporadic, especially in the formative years of both institutions. If instructors kept comprehensive records for the Litchfield Female Academy or the Litchfield Law School, they do not survive. Researchers and staff have identified students through letters, diaries, family histories and genealogies, and town histories as well as catalogues of students printed in various years. Art and needlework have provided further identification of Female Academy Students, and Litchfield County Bar records document a number of Law School students. The history of both schools and the identification of the students who attended them owe credit to the early 20th century research and documentation efforts of Emily Noyes Vanderpoel and Samuel Fisher, and the late 20th century research and documentation efforts of Lynne Templeton Brickley and the Litchfield Historical Society staff.
CITATION OF ATTENDANCE:
Woodruff, George Catlin. "LLS Notes." Litchfield Historical Society.;