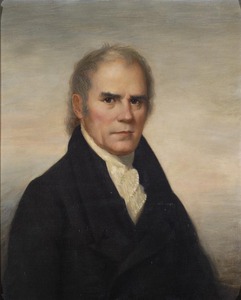 Gender:
Male
Born:
April 16, 1755
Died:
January 23, 1838
Home Town:
Lyme, CT
Later Residences:
Litchfield, CT
Marriage(s):
Dorothy Champion Deming (August 7, 1781)
Biographical Notes:
Julius Deming was born in 1755 in Lyme, Connecticut, son of David Deming and Mehitable Champion Deming. He served through the Revolutionary War with the rank of Captain of Cavalry under his uncle Col. Henry Champion. Deming removed to Litchfield, Connecticut where he had served as a commissary officer during the war, and commenced business there in 1781. Early in his business life, he traveled to London where he arranged to import goods directly from that city; something that few, if any, merchants did in this state. He was later in partnership with Benjamin Tallmadge. He also bought shares in the Litchfield China Trading Company, founded by Oliver and Frederick Wolcott and Benjamin Tallmadge to import tea and nankeen from China aboard their ship the Trident. Despite reportedly having a dislike ...for public office, Deming was elected to the state House of Representatives three times (1790, 1791 and 1798) as well as serving as magistrate of the county for several years. From 1801-1814 he served as County Treasurer. He married Col. Henry Champion’s daughter, Dorothy Champion, in 1781. They had eight children.
[more][less]
Profession / Service
Profession:
Military; Political Office; Business; Trade
Immediate Family (Why only immediate family?)
Related Objects and Documents
In the Ledger:
Other:
Litchfield area family papers, 1794-1860
Contact Us