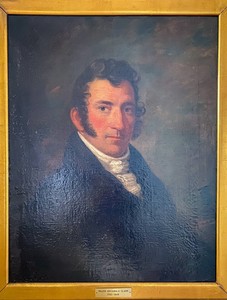 Gender:
Male
Born:
1783
Died:
December 26, 1848
Home Town:
Savannah, GA
Later Residences:
St. Mary, GA
Marriage(s):
Rhoda Wadsworth Clark (September 1802)
Biographical Notes:
Archibald Clark was the son of Henry and Margaret (Smith) Clark. His father had emigrated from Scotland to Savannah, GA in the mid-eighteenth century and joined the Continental Army. Clark entered the Litchfield Law School at the age of 16 and spent four years there, being one of the youngest students ever to attend. Clark and his wife had ten children. Clark then returned to GA with his wife and settled in St. Mary's in Camden County, GA. He practiced law and acquired extensive lands on St. Mary's River and built saw mills on Spanish Creek. Clark also maintained some New England ties. He built a clapboard home in the New England style for his wife which was unlike other area houses. In 1804, it is believed that Clark hosted Aaron Burr as the latter was traveling in the south following his ...duel with Alexander Hamilton. Burr's memoirs include a letter to Theodosia from September 26, 1804, in which Burr states he "was treated with great kindness and respect at St. Mary's." In 1807, Clark was appointed Collector of Port of St. Mary's by President Madison which was an important post due to the presence of Spanish Florida across the river. Clark held the position until 1843 and during those years also acted as the Mayor of St. Mary's. He served as a Major in the War of 1812 and was taken prisoner by the British. He died in St. Mary's, GA.

The Camden County, Georgia: Slave Deed Abstracts indicate that Clark enslaved several people. A deed is recorded on page 104 for the sale of "Old Peter, Katy, Nellie, Sylvia, and Nat." It was signed by his son, Henry E. W. Clark (LFA, 1824), the administrator of the estate, and recorded on January 10, 1851.

Records for the schools were sporadic, especially in the formative years of both institutions. If instructors kept comprehensive records for the Litchfield Female Academy or the Litchfield Law School, they do not survive. Researchers and staff have identified students through letters, diaries, family histories and genealogies, and town histories as well as catalogues of students printed in various years. Art and needlework have provided further identification of Female Academy Students, and Litchfield County Bar records document a number of Law School students. The history of both schools and the identification of the students who attended them owe credit to the early 20th century research and documentation efforts of Emily Noyes Vanderpoel and Samuel Fisher, and the late 20th century research and documentation efforts of Lynne Templeton Brickley and the Litchfield Historical Society staff.
CITATION OF ATTENDANCE:
Fields, Tara D., comp. Camden County, Georgia: Slave Deed Abstracts. 2008, p. 126. Accessed at https://www.yumpu.com/en/document/read/15249775/camden-county-georgia-slave-deed-abstracts-afriquest August 16, 2022.