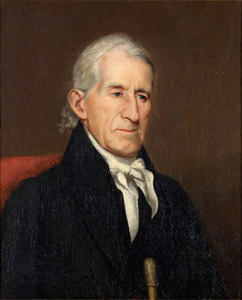 Gender:
Male
Born:
1761
Died:
1842
Later Residences:
New Haven, CT
Binghamton, New York
Marriage(s):
Elizabeth Stockwell Collier (unknown)
Biographical Notes:
Thomas Collier was a printer and editor. He apprenticed in Boston, MA but left the city during the Revolutionary War. He worked in Litchfield and New Haven, CT; Bennington, VT; and Troy and Binghamton, NY. Thomas and Elizabeth Collier were Litchfield residents from 1784 to 1808. Times in Litchfield were difficult for the family. As a printer, the income Thomas generated was often insufficient to cover the expenses of his business and 11 children. Additionally, a history of illness often prevented Collier from publishing his newspaper, the Monitor as often as expected. While this newspaper was only one of many items printed by Collier, it was the object of much community support. In a time of partisan rancor, many of the town’s leading citizens were Federalists and welcomed a venue in which ...to voice their opinions. One such Federalist was Tapping Reeve, who, in an 1803 edition of the Monitor, printed a letter attacking Thomas Jefferson. A lawsuit resulted in which Jefferson sued Reeve, who was indicted along with Collier, for libel. Collier spent time in prison in 1806 as a result. Despite petitions to raise money on his behalf by citizens such as Julius Deming and Frederick Wolcott, his financial woes continued and he was confined to debtor’s prison. In 1808, Collier petitioned the state for an Act of Insolvency to release him from his debt. His petition was granted. The Colliers eventually settled with a son in Binghamton, NY in 1827.
[more][less]
Profession / Service
Profession:
Editor; Business
Immediate Family (Why only immediate family?)
Related Objects and Documents
In the Ledger:
Other:
Letter to Frederick Wolcott
Contact Us