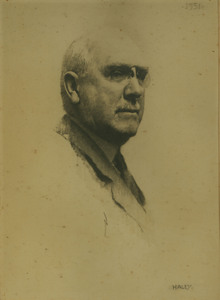 He was a member of the Yale Corporation from 1910-1925 and a member of boards of corporate and charitable institutions. After he retired, he served as chairman of the Connecticut Tercentenary Committee from 1933 to 1935. He helped organize the Connecticut Highway Safety Commission in 1936 and served on it until 1940. He was the Connecticut ...Defense Administrator from 1940-1943. He also served as a director of the New York Trust. Co. of the Chicago, Milwaukee and St. Paul Railway Co., the National Fuel Gas Company, the First National Bank of Litchfield, the Litchfield Savings Society, Sargent and Co., in New Haven, and the Litchfield Enquirer. He married Margaret Sargent Fisher of New Haven in 1895. They moved to Litchfield in 1920.

During Fisher's residence in Litchfield, he served as president of the Litchfield Historical Society and chairman of the town's Board of Finance. He was a member of the Sanctum and the Litchfield Country Club. Starting in the 1930s, Fisher undertook a project to assemble data on every student who attended the Litchfield Law School from 1774-1833. He conducted research and corresponded with colleges and universities, state libraries, historical societies, and other institutions across the country. He also employed genealogists to track down information. The results of his investigations were published in a book by the Yale Law School Library in conjunction with Yale University Press in 1946.