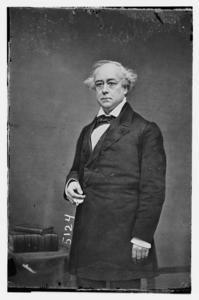 Gender:
Male
Born:
August 6, 1804
Died:
June 26, 1870
Home Town:
New York, NY
Later Residences:
New York, NY
Marriage(s):
Anna Markoe Heyward Cutting (June 21, 1827)
Biographical Notes:
Francis Brockholst Cutting was a famous jurist born in New York City on Agust 6, 1805. Information on his formative studies vary, but he did attend Litchfield Law School and was admitted to the bar in 1827. He opted to use his legal skills in politics and he quickly distinguished himself in New York. In 1836 he was elected a member of the NY state legislature, as a Democrat. From 1840 - 1853 he devoted himself to his large and lucrative practice in New York City, and from 1853 - 1855 he represented one of its districts in congress, where he was a War Democrat.
Upon the nomination of Pres. Abraham Lincoln, he aided in his election campaign, and thereafter was active in supporting the cause of the Union. After the Civil War Mr. Cutting retired from politics and quietly ...pursued a legal career in New York City. He died there June 26, 1870 and was buried at the Greenwood Cemetery in Brooklyn, NY.
[more][less]
Education
Years at LLS:
1823
Other Education:
Graduated from Columbia College.
Profession / Service
Profession:
Lawyer; Political Office
Admitted To Bar:
New York in 1827
Political Party:
Democrat
Federal Posts:
U.S. Representative (NY) 1853-1855
State Posts:
State Representative (NY) 1836-1837
Local Posts:
Recorder (New York, NY)
Alderman (New York, NY) 1843
Immediate Family (Why only immediate family?)
Related Objects and Documents
In the Ledger:

Records for the schools were sporadic, especially in the formative years of both institutions. If instructors kept comprehensive records for the Litchfield Female Academy or the Litchfield Law School, they do not survive. Researchers and staff have identified students through letters, diaries, family histories and genealogies, and town histories as well as catalogues of students printed in various years. Art and needlework have provided further identification of Female Academy Students, and Litchfield County Bar records document a number of Law School students. The history of both schools and the identification of the students who attended them owe credit to the early 20th century research and documentation efforts of Emily Noyes Vanderpoel and Samuel Fisher, and the late 20th century research and documentation efforts of Lynne Templeton Brickley and the Litchfield Historical Society staff.
CITATION OF ATTENDANCE:
Litchfield Eagle, October 6, 1823; Catalogue of the Litchfield Law School (Hartford, CT: Press of Case, Tiffany and Company, 1849), 19.
Secondary Sources:
Biographical Directory of the American Congress, 1774-1927. U.S. Government Printing Office, 1928.
Contact Us