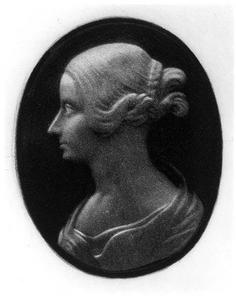 Mary Ann was active in many benevolent activities and societies during her life. In May 1854, she and Anna R. Emmett (the wife of a specialist in women's and children's diseases) founded the Nursery and Children's Hospital of New York City. The hospital became the first institution in the United States devoted primarily to day care, taking in the children of working ...women so their mothers, including wet nurses, could "go out to service." The institution was funded through the first charity balls.

Mary Ann's interests also stretched beyond benevolent work. Her talents in sculpture and cameo cutting led her to become a member of the National Academy of Design (she was one of eleven women elected to membership) as well as the Brooklyn Art Association. She also occasionally instructed young ladies in art. After leading a full life Mary Ann passed away on October 27, 1888 of diabetes.

[more][less]
Education
Years at LFA:
1825
Profession / Service
Profession:
Arts; Social Activist
Benevolent and Charitable Organizations:
Founder of the Nursery for the Children of Poor Woman in New York City, 1854 (later re-named the Nursery and Child's Hospital)
Immediate Family (Why only immediate family?)
Related Objects and Documents
In the Ledger:

Records for the schools were sporadic, especially in the formative years of both institutions. If instructors kept comprehensive records for the Litchfield Female Academy or the Litchfield Law School, they do not survive. Researchers and staff have identified students through letters, diaries, family histories and genealogies, and town histories as well as catalogues of students printed in various years. Art and needlework have provided further identification of Female Academy Students, and Litchfield County Bar records document a number of Law School students. The history of both schools and the identification of the students who attended them owe credit to the early 20th century research and documentation efforts of Emily Noyes Vanderpoel and Samuel Fisher, and the late 20th century research and documentation efforts of Lynne Templeton Brickley and the Litchfield Historical Society staff.
CITATION OF ATTENDANCE:
1825 Litchfield Female Academy Catalogue (Vanderpoel, Emily Noyes. Chronicles of A Pioneer School From 1792 To 1833. Cambridge, MA: The University Press, 1903).