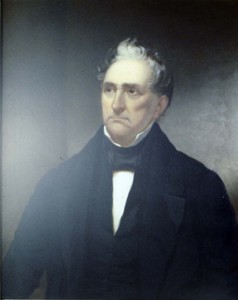 Other Name:
Henry W. Edwards
Gender:
Male
Born:
October 1779
Died:
July 27, 1847
Home Town:
New Haven, CT
Later Residences:
New Haven, CT
Marriage(s):
Lydia Miller Edwards (October 4, 1801)
Biographical Notes:
Henry Waggaman Edwards was the son of Pierpont and Frances (Ogden) Edwards. Edwards was the grandson of the Rev. Jonathan Edwards. After leaving Litchfield, Edwards settled in New Haven, CT. He was elected to U.S. Congress in 1819 and then appointed by Governor Wolcott to the Senate in 1823 to fill Elijah Boardman's seat. He later served as Governor of the State of CT from 1830 to 1838 with the exception of the year 1834 when he was defeated by Samuel Foot, who also graduated from the Litchfield Law School. In one of his messages to the CT State Assembly, Edwards advocated the abolition of property qualifications for voting, for increased governmental control over large business interest and stricter legislation regarding joint stock companies. He died in New Haven, CT.
Education
Years at LLS:
1798
Other Education:
Graduated from the College of New Jersey (now Princeton University) in 1797.
Profession / Service
Profession:
Lawyer; Political Office
Federal Posts:
U.S. Representative (CT) 1829-1833
U.S. Senator (CT) 1823-1827
State Posts:
State Senator (CT) 1827-1829
State Representative (CT) 1830
Governor (CT) 1833, 1835-1837
State Committees:
Speaker of the House of Representatives in 1830.
Immediate Family (Why only immediate family?)
Related Objects and Documents
In the Ledger:

Records for the schools were sporadic, especially in the formative years of both institutions. If instructors kept comprehensive records for the Litchfield Female Academy or the Litchfield Law School, they do not survive. Researchers and staff have identified students through letters, diaries, family histories and genealogies, and town histories as well as catalogues of students printed in various years. Art and needlework have provided further identification of Female Academy Students, and Litchfield County Bar records document a number of Law School students. The history of both schools and the identification of the students who attended them owe credit to the early 20th century research and documentation efforts of Emily Noyes Vanderpoel and Samuel Fisher, and the late 20th century research and documentation efforts of Lynne Templeton Brickley and the Litchfield Historical Society staff.
CITATION OF ATTENDANCE:
Catalogue of the Litchfield Law School, From 1798 to 1827 Inclusive (Litchfield, CT: S.S. Smith, 1828), 7.
Secondary Sources:
Norton, Frederick Calvin. The Governors of Connecticut. Hartford, CT: The Connecticut Magazine Company, 1905.; Biographical Directory of the American Congress, 1774-1927. U.S. Government Printing Office, 1928.
Contact Us