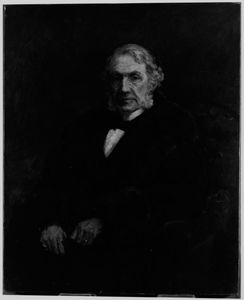 Gender:
Male
Born:
April 4, 1802
Died:
March 30, 1887
Home Town:
Boston, MA
Later Residences:
Boston, MA
Marriage(s):
Anna Perkins Rogers (September 12, 1831)
Biographical Notes:
Henry Bromfield Rogers was the son of the prominent Boston mercantile family which ran the firm of Bromfield and Rogers. Litchfield merchant Julius Deming had shipped goods from London with the firm since the 1780s. Following graduation from Harvard, his father, Daniel Denison Rogers, wrote to his business friend Julius Deming, saying, "The Law School in Litchfield has obtained so much reputation among us that I am desirous that a son of mine, if he may be admitted, pursue his studies there, instead of this place where there are so many temptations and interruptions to take off from study." He requested information as to when Henry should depart for Litchfield and added, "Shall I so far presume upon our former friendship as to ask the favor of you to give me the necessary information."

After ...attending the Litchfield Law School, Rogers returned to Boston where he opened a law office. However, he left the practice of law after a few years to devote the rest of his life to philanthropic, benevolent and reform work, becoming one of Boston's leading charitable donors. He was a trustee of the Massachusetts General Hospital for forty years. In addition, he was the president of the Home for Old Women from its founding till his death, when he left the home $10,000. He was a long-term treasurer of the Boston Atheneum and founding trustee of the Institute of Technology, later the MIT, to which he also left $10,000 at his death.

Furthermore, Rogers was an active benefactor of the Perkins Institute for the Blind and of the Unitarian Church. Henry Bromfield Rogers was an active and generous alumnus of Harvard, serving on the Committee for the building of Memorial Hall, giving to "anonymous" fellowships and establishing the first gymnasium. On his death he left Harvard $20,000. During the Civil War, Rogers served near the front in Washington, D.C., as a Relief Agent of the Sanitary Commission. He helped treat soldiers wounded at the battles of Savage's Station and Harrison's Landing in 1861. After the war he returned to Boston, where he later died.

Records for the schools were sporadic, especially in the formative years of both institutions. If instructors kept comprehensive records for the Litchfield Female Academy or the Litchfield Law School, they do not survive. Researchers and staff have identified students through letters, diaries, family histories and genealogies, and town histories as well as catalogues of students printed in various years. Art and needlework have provided further identification of Female Academy Students, and Litchfield County Bar records document a number of Law School students. The history of both schools and the identification of the students who attended them owe credit to the early 20th century research and documentation efforts of Emily Noyes Vanderpoel and Samuel Fisher, and the late 20th century research and documentation efforts of Lynne Templeton Brickley and the Litchfield Historical Society staff.
CITATION OF ATTENDANCE:
Catalogue of the Litchfield Law School (Hartford, CT: Press of Case, Tiffany and Company, 1849), 19.
Contact Us