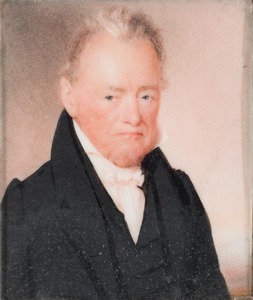 Gender:
Male
Born:
1750
Died:
1840
Home Town:
Hartford, CT
Later Residences:
Washington, CT
Litchfield, CT
Marriage(s):
Charlotte Judson Sheldon (1777)
Huldah Stone Sheldon (1784)
Biographical Notes:
Dr. Daniel Sheldon, who practised medicine with great reputation and success, in Litchfield, Connecticut, for more than half a century, was born in the city of Hartford, October 19th, 1750, O. Style. His early education was received at the long known and celebrated 'Hartford Grammar School,' then, no less than now, appreciated as one of the best literary institutions of the kind in New England.

After leaving this school, and when quite young, he placed himself under the tuition of the eccentric and celebrated Dr. Seth Bird of Litchfield, one of the most prominent medical men of his time in the State, who was his relative by marriage, and a most suitable instructor for a young man of Sheldon's age and abilities. He continued with Dr. Bird some years. When at the early age of twenty-one ...he commenced the practice of medicine in that part of Woodbury, Conn., now incorporated into a separate town by the name of Washington. His practice soon became so extensive that he took as a partner in business Dr. Seth Hastings, father of the celebrated musician of that name, a gentleman who afterwards gained great celebrity in his profession.

While Dr. Sheldon remained in Woodbury he married Miss Charlotte Judson [?-1784, married in 1777], by whom he had two children, one a daughter [Charlotte Sheldon, 1780?-1840?] who was insane for a long period, and died at the Retreat in Hartford. The other, Daniel Sheldon, Esq., [1780?-1828] who was for many years Clerk in the Treasury Department at Washington with Secretaries Wolcott and Gallatin, and afterwards went to France with Mr. Gallatin as Secretary of Legation and charge of affairs. When Dr. Lemuel Hopkins left Litchfield for the city of Hartford in 1784, Dr. Sheldon removed to Litchfield, and continued there till his death. [Other sources indicate Dr. Sheldon moved to Litchfield in 1781 followng the birth of his son in 1780.] In this new location his practice became more respectable and extensive, and he established a reputation which was not surpassed by any medical practitioner, in the State. Dr. Sheldon married for his second wife Miss Huldah Stone [1759-1817, marrried in 1784], sister of Mrs. Hopkins. From this time a friendship commenced between these two eminent medical men which continued till the death of Dr. Hopkins in 1800. [Dr. Sheldon and Huldah Stone Sheldon had four children: Lucy Sheldon Beach (1788-1889), Frederick Sheldon (1785-1859), Henry Sheldon (1790-1868?), and William Sheldon (1802-1826).]

Dr. Sheldon was a great supporter of the LItchfield Female Academy. The Sheldon house located on North Street, just to the north of the Female Academy housed borders during the school's operation.

In person Dr. Sheldon was small, slender and delicate. He was predisposed by the conformation of his chest to pulmonary complaints, and while young had an abscess formed in his lungs, which burst and discharged an immense quantity of pus so fetid that for months after it was disagreeable to be in the room with him, or even to ride by his side on the highway. Dr. Sheldon gave the writer a particular account of the illness which preceded this great abscess. He was sick two weeks with what was considered a mild remittent fever, in which he had chills, exacerbations of heat, and finally free sweating. He was attended by Dr. Bird and Hopkins, who were esteemed the best physicians in the State, and who were not inferior to any others. On the fourteenth day of the fever, Dr. Bird visited his patient, and found him in a free perspiration, and encouraged him that as the time for a crisis had arrived, and the perspiration indicated its commencement, he might expect that the disease would soon yield and he would be again convalescent. Before Dr. Bird left the room the abscess burst, and established beyond controversy the true nature of the disease. This ulcer did not wholly heal for two years. During its discharge he took an immense quantity of Peruvian bark in infusion or decoction, and contracted a habit of taking opium, which continued till old age, when it was abandoned. Dr. Sheldon informed the writer that such was the quantity of bark taken in the course of his illness that the grounds rejected amounted to more than two bushels. He took from two to four drachms of opium daily for nearly or quite forty years. In old age he left it off without detriment gradually diminishing it for two or three years. His usual pill was a drachm which he swallowed without difficulty.

In a very short time after the discharge of this abscess of the lungs, Dr. Sheldon resumed his practice which had been interrupted for a few weeks only, and rode on a bleak and rough country more than half a century, always on horseback, performing an immense amount of business, while his emaciated and extremely delicate frame, drawn over almost to a curve, would indicate such a feeble state as entirely to forbid any active employment. Dr. Sheldon lived to the extreme age of 89 years and a half, and towards the close of life became corpulent and bulky. He died April 10th, 1840.

Dr. Sheldon was endowed by nature with a vigorous and well balanced mind; he was quick to discover and ready to apply all his knowledge in the practice of his profession. He had the tact which led him at once to the indication of disease, and boldness in his prescriptions which only comes properly from a thorough knowledge of the case. He was also a learned man, fond of books, and a thorough, diligent student. He had a faculty of gleaning from authors whatever was valuable in their works by a hasty perusal of their pages. His memory was retentive, he profited greatly by his own experience, and was enabled to have analogies by which that experience was of great value to him. In the treatment of pulmonary consumption he had great and desired celebrity. Many persons affected with symptoms of that disease, flocked to him from a great distance, and his success sustained his reputation, till from age and infirmity he ceased to practice his profession. The writer met him repeatedly in such cases. There was no quackery about his practice, but plain, open, common sense views of what changes might be wrought by perseverance and suitable remedies.

Accustomed as he was to the use of opium in his own case, he was not afraid to prescribe it for others. His remedies were simple, but effective. Substantial diet, narcotic and tonic remedies, and riding on horseback, which he considered superior to all other means of restoration, and quite superior to all other modes of exercise. He was a successful physician in this and other chronic cases, and his counsel was sought by many respectable individuals near and remote. It was my good fortune to meet him occasionally, and at our last interview he spent some days with me at my residence. His conversation was most instructive and his kindness and courtesy made a deep impression on my feelings. In investigating a case of pulmonary consumption, he paid great attention to the nature of the secretions from the lungs. If the pus was benign, he gave, in many cases, a favorable prognosis, and many cases with symptoms very alarming, recovered under his prescriptions, in which other physicians predicted unfavorably. In a case under my care in which low diet, and antiphlogistics had been prescribed by a physician high in the confidence of the patient, he recommended animal food, and a generous diet of vegetables and fruits, myrrh, iron and opium. The patient gained strength, flesh and courage under this treatment, but finally fell a victim to the disease.

The evening of Dr. Sheldon's days were spent in tranquillity and ease. To a competency saved from the earnings of his professional life, a good fortune was added by a legacy from a son, who died in France some years before his father.

Dr. Sheldon was an ardent friend of medical improvement, He was one of the original petitioners for the establishment of a State Medical Society, and for many years was an active member of the Society, and its Secretary.The honorary degree of Doctor of Medicine was conferred upon him by the corporation of Yale College.

The above information was taken from: Williams, Stephen West. American Medical Biography: or, Memoirs of Eminent Physicians. Greenfield, MA: L. Merriam and Co., 1845.

Sheldon provided little social life for the Litchfield Female Academy students who boarded at his house.