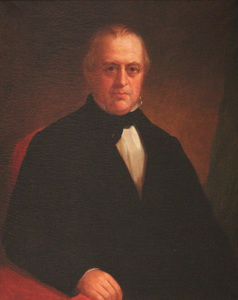 Gender:
Male
Born:
November 27, 1791
Died:
May 3, 1884
Home Town:
Roxbury, CT
Later Residences:
Litchfield, CT
Stamford, CT
Marriage(s):
Maria Cook Smith (June 2, 1832)
Mary Ann Dickinson Smith (November 7, 1850)
Biographical Notes:
Truman Smith was the son of Phineas and Deborah Ann Judson Smith. Born November 27, 1791, Truman was raised on his father's farm in Roxbury, Connecticut and completed his preparation for college under the Rev. Daniel Parker. In 1815 he graduated from Yale College, and in 1817 entered into the Litchfield Law School to undertake legal studies. Upon his admission to the bar in 1818, he opened a law office in Litchfield which lasted until 1854. His first wife, Maria Cook was the daughter of Roger Cook of Litchfield, Connecticut. After she passed away, Smith married Mary Ann Dickinson, the adopted daughter of miniature painter Anson Dickinson. He had nine children between his two marriages.

After serving in the Connecticut State Legislature in 1831-1832 and 1834 Truman Smith was elected ...to the United States House of Representatives as a member of the Whig Party in 1838. From 1838 until 1843 he served in his role as U.S. Representative, and from 1845 to 1849 served in that role again. In 1844 he was a presidential elector on the Whig ticket. In the House of Representatives Smith was mainly interested in parliamentary management on behalf of the Whig Party. He was also one of the first of the party leaders to promote the presidential candidacy of Zachary Taylor in 1848, and, as the first chairman of the Whig national committee, he directed Taylor's campaign. He declined to accept the reward of appointment as secretary of the interior however, preferring to take the seat in the Senate to which he had been elected in 1849, where he remained until his resignation from the United States Senate on May 24, 1854. During 1853, Senator Smith served on several standing committees, including Indian Affairs; Patents and the Patent Office; Post Office and Post Roads; Roads and Canals; and Printing.

While serving as Senator, Smith was very active in representing his Connecticut constituents regarding international controversies, postage rates, and ports. Truman Smith's service as Senator occurred at a crucial time just before the start of the Civil War and during the discussions of the Kansas-Nebraska Act, which he ardently opposed. In May of 1854, Smith resigned from the U. S. Senate soon after the passage of the Kansas-Nebraska Act.

Following his resignation he returned to Connecticut and moved his law office from Litchfield to Stamford, and also opened a law office in New York City. In July 1862 President Abraham Lincoln appointed Truman Smith a judge of the mixed court set up by the treaty with England of April 7, 1862, for the trial of British and American vessels suspected of engaging in the slave trade. He served until the court was terminated in 1870. Smith retired from active legal practice in 1872, but remained active in several benevolent and philanthropic movements. He later died in Stamford, Connecticut on May 3, 1884.


[more][less]
Education
Years at LLS:
1817
Other Education:
Completed his preparation for college with the Reverend Daniel Parker.
Graduated from Yale College in 1815.
Profession / Service
Profession:
Lawyer; Political Office
Admitted To Bar:
Litchfield, CT in 1818
Training with Other Lawyers:
He read in the office of Hon. Noah Benedict before attending the Litchfield Law School.
Political Party:
Whig
Federal Posts:
U.S. Representative (CT) 1839-1843, 1845-1849
U.S. Senator (CT) 1849-1854
Judge for the Court of Arbitration 1862-1870
Federal Committees:
Served as a Presidential Elector in 1844. Chairman of the Whig Committee during the Presidential campaign of Zachary Taylor in 1848.
State Posts:
State Representative (CT) 1831-1832, 1834
Immediate Family (Why only immediate family?)
Related Objects and Documents
In the Ledger:
Other:
Litchfield County, Litchfield County Court Papers by Subject: Admissions to the Bar
Connecticut Historical Society, Johnson family papers, 1722-1863

Records for the schools were sporadic, especially in the formative years of both institutions. If instructors kept comprehensive records for the Litchfield Female Academy or the Litchfield Law School, they do not survive. Researchers and staff have identified students through letters, diaries, family histories and genealogies, and town histories as well as catalogues of students printed in various years. Art and needlework have provided further identification of Female Academy Students, and Litchfield County Bar records document a number of Law School students. The history of both schools and the identification of the students who attended them owe credit to the early 20th century research and documentation efforts of Emily Noyes Vanderpoel and Samuel Fisher, and the late 20th century research and documentation efforts of Lynne Templeton Brickley and the Litchfield Historical Society staff.
CITATION OF ATTENDANCE:
Litchfield County Bar Association Records, Litchfield Historical Society, Helga J. Ingraham Memorial Library.