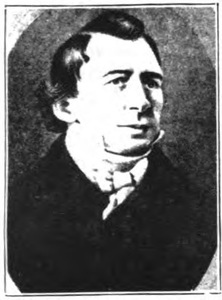 In 1797, he began a legal practice in New Haven, CT. He moved his family to OH in 1800, after making a short preliminary visit there. Tod settled in Youngstown, OH. He became well respected for his legal knowledge. In 1806, the Ohio legislature approved his appointment as one of the judges on the Ohio Supreme Court.

In 1806, Calvin Pease, a judge of the Court of Common Pleas for the Third Circuit, declared a section of an Ohio law in violation of the Ohio Constitution of 1803. The Ohio law permitted justices of the peace to oversee legal disputes involving property or money in excess of twenty dollars. Pease declared that the Constitution promised trial ...by jury and that the Ohio law was a clear violation of that guarantee. As a result of Pease's decision, the law could not be enforced in Ohio. Supreme Court Justices Samuel Huntington and Tod sustained Pease's decision in the case Rutherford v. M'Faddon in 1807. The judges' actions essentially established judicial review of legislative decisions.

At the heart of this case was the question of the courts' ability to declare laws unconstitutional. The legislature had no desire to relinquish any power to the judiciary. To weaken the judicial branch, the legislature attempted to impeach both Tod and Pease. The legislature acquitted both men of all crimes by a single vote. Tod resigned his seat in 1810.

Following his time on the Ohio Supreme Court, Tod fought in the War of 1812, serving the American cause bravely at Fort Meigs. Upon the war's conclusion, Tod returned to the judiciary, this time as a member of the Court of Common Pleas for the Third Circuit. He held his seat from 1815 until 1829. He devoted the last years of his life to farming and his law practice. He died in 1841 at his home Brier Hill near Youngstown, OH.

Records for the schools were sporadic, especially in the formative years of both institutions. If instructors kept comprehensive records for the Litchfield Female Academy or the Litchfield Law School, they do not survive. Researchers and staff have identified students through letters, diaries, family histories and genealogies, and town histories as well as catalogues of students printed in various years. Art and needlework have provided further identification of Female Academy Students, and Litchfield County Bar records document a number of Law School students. The history of both schools and the identification of the students who attended them owe credit to the early 20th century research and documentation efforts of Emily Noyes Vanderpoel and Samuel Fisher, and the late 20th century research and documentation efforts of Lynne Templeton Brickley and the Litchfield Historical Society staff.
CITATION OF ATTENDANCE:
Moothall Society Record Books, Litchfield Law School Collection Series 1: Period Documents: Subseries 3: Litchfield Historical Society.
Secondary Sources:
Reed, George Irving, Emilius Oviatt Randall and Charles Theodore Greve, eds. Bench and Bar of Ohio: a Compendium of History and Biography. Chicago: Century Publishing and Engraving Company, 1897.

Tod, John. Some Account of the History of the Tod Family and Connections. Youngstown, OH: 1917.