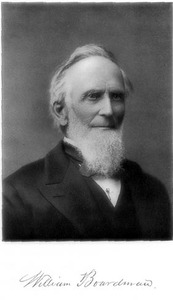 Gender:
Male
Born:
October 10, 1794
Died:
August 27, 1871
Home Town:
New Milford, CT
Later Residences:
New Haven, CT
Marriage(s):
Lucy Hall Boardman (July 28, 1857)
Biographical Notes:
William Whiting Boardman was the son of Elijah Boardman and Mary Ann Whiting Boardman. As a boy it is believed that he may have attended the Litchfield Female Academy as his siblings did. He later attended school at the Colchester Academy in preparation for college. He graduated from Yale College in 1812 and then studied law first in Cambridge for some time and then at the Litchfield Law School in 1816, two years before being admitted to the bar.

Boardman's first major position was as a Judge of Probate in New Haven, Connecticut from 1825 to 1829. He then began a long career in state politics. He first served as a member of the Connecticut Senate from 1830 to 1832 and then was elected to the Connecticut House of Representatives from 1836 until 1839, and then again in 1845, 1849 ...and 1851. In 1840, Boardman was appointed to fill a vacancy in the United States Congress and was subsequently elected. He remained in that office for three years.

Other interests included the militia. Boardman rose to the rank of major in the Governor's Foot Guard. He also pursued outside financial and scholarly interest. He was a trustee of Trinity College from 1832 until 1871 and acted as the president of both the Gas Light Company of New Haven and the New Haven Water Company.

In 1857, he married Lucy Hall of Poland, Ohio. He and his wife had no children. He died in his New Haven home on Hillhouse Avenue and is interred in Grove Street Cemetery.
[more][less]
Quotes:
"Under a decided and sometimes brusque manner, Mr. Boardman concealed unusual tenderness of heart, and rarely permitted himself to be led into serious differences with his fellow-men, but whenever this did occur, he was ever ready to yield more than half the ground to effect a reconciliation. As a public-spirited citizen, Judge Boardman will long be regretted by the community in which he so long resided."
Obituary:William Whiting Boardman, 1871, August 29. New York Times p. 4.
Education
Years at LLS:
1816-1817
Other Education:
Possibly attended the Litchfield Female Academy before attending the Colchester Academy. His obituary notes his having attended school in Litchfield and Colchester. He was graduated from Yale College in 1812 and studied law at Cambridge.
Profession / Service
Profession:
Lawyer; Business; Political Office
Admitted To Bar:
1818 in Litchfield County Court
Political Party:
Whig
Federal Posts:
U.S. Representative (CT) 1840-1843
Federal Committees:
Chairman of the Committee on Public Building and Grounds from 1841-1842.
State Posts:
State Senator (CT) 1830-1832
State Representative (CT) 1836-1839, 1845, 1849, 1851
State Committees:
Clerk of the State Senate in 1820. Speaker of the State House of Representatives in 1836, 1839, and 1845.
Local Posts:
Judge of Probate (New Haven, CT) 1825-1829
Immediate Family (Why only immediate family?)
Related Objects and Documents
In the Ledger:
Other:
Litchfield County, Litchfield County Court Papers by Subject: Admissions to the Bar
Johnson family papers, 1722-1863
Portrait of Judge William Whiting Boardman

Records for the schools were sporadic, especially in the formative years of both institutions. If instructors kept comprehensive records for the Litchfield Female Academy or the Litchfield Law School, they do not survive. Researchers and staff have identified students through letters, diaries, family histories and genealogies, and town histories as well as catalogues of students printed in various years. Art and needlework have provided further identification of Female Academy Students, and Litchfield County Bar records document a number of Law School students. The history of both schools and the identification of the students who attended them owe credit to the early 20th century research and documentation efforts of Emily Noyes Vanderpoel and Samuel Fisher, and the late 20th century research and documentation efforts of Lynne Templeton Brickley and the Litchfield Historical Society staff.
CITATION OF ATTENDANCE:
Catalogue of the Litchfield Law School, Hartford, CT: Press of Case, Tiffany and Company, 1849, 14.