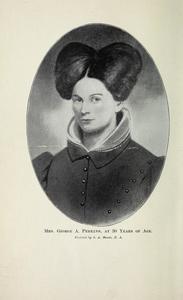 Other Name:
Anna Shepard; Julia Anna Shepard; Juliana Shepard; Mrs. George A. Perkins
Gender:
Female
Born:
November 11, 1799
Died:
January 24, 1884
Home Town:
Athens, PA
Later Residences:
Ithaca, NY
Marriage(s):
George A. Perkins (May 1, 1823)
Biographical Notes:
Julia Shepard Perkins, daughter of John Shepard of Athens, Pennsylvania, was born November 11, 1799. As a young girl Julia attended the Pennsylvania Academy in Athens, Pennsylvania, which her father had been a founder of. She then continued her formal education in 1818 in Litchfield, Connecticut where she studied at Sarah Pierce's Female Academy. After a year of studying Julia became an assistant teacher at the the school in 1819. That same year she relocated to the Ithaca Academy, and served as a teacher from 1819 to 1823. Julia later married George A. Perkins, also a native of Athens, Pennsylvania. They had five children. In 1870, she published a history called Early Times on the Susquehanna.
Quotes:
"Were I not as pleasantly situated as heart can wish, with the best of friends and associates, and my mind engaged and interested with my literary pursuits, I should be inclined to think I was forgotten. I will hasten to tell you something of Litchfield. It only wants the Tioga and Susquehanna rivers to make it the most delightful place I have ever seen. The society far exceeds the local situation with all its beauty, and there are schools where every science may be studied, charitable institutions for the dissemination of knowledge are established, and every one appears to be engaged in the instruction of the indigent. We have this summer a very interesting school; there are about one hundred pupils." - Julia Sherpard Perkins (Vanderpoel, Emily Noyes. More Chronicles of A Pioneer School From 1792 to 1833. Cambridge, MA: The University Press, 1927).
Education
Years at LFA:
1818
Room and Board:
Boarded with Mrs. Bull
Profession / Service
Profession:
Educator
Immediate Family (Why only immediate family?)
Related Objects and Documents
In the Ledger:

Records for the schools were sporadic, especially in the formative years of both institutions. If instructors kept comprehensive records for the Litchfield Female Academy or the Litchfield Law School, they do not survive. Researchers and staff have identified students through letters, diaries, family histories and genealogies, and town histories as well as catalogues of students printed in various years. Art and needlework have provided further identification of Female Academy Students, and Litchfield County Bar records document a number of Law School students. The history of both schools and the identification of the students who attended them owe credit to the early 20th century research and documentation efforts of Emily Noyes Vanderpoel and Samuel Fisher, and the late 20th century research and documentation efforts of Lynne Templeton Brickley and the Litchfield Historical Society staff.
CITATION OF ATTENDANCE:
"Catalogue of the Ladies Academy in Litchfield" 1818 by J.A. Shepard (Litchfield Historical Society - Litchfield Female Academy collection).