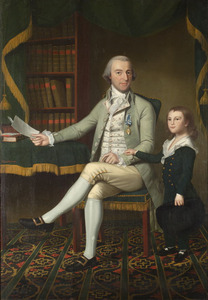 In 1773, Tallmadge completed his studies and became a teacher in Wethersfield, Connecticut. As the American Revolution began, Tallmadge thought seriously of joining the war. Captain Chester of Wethersfield approached Tallmadge in 1776 for a Lieutenant position in one of the six-month Connecticut regiments. He accepted and participated in his first battle, the Battle of Long Island, which resulted in an English victory. His brother William was captured and Tallmadge wrote in ...his memoir that his brother literally starved to death. He also recorded his impressions of the battle:

"This was the first time in my life that I had witnessed the awful
scene of a battle, when man was engaged to destroy his fellow man.
I well remember my sensations on the occasion, for they were solemn beyond
description, and very hardly could I bring my mind to be willing to attempt the life
of a fellow creature."

As Director of Military Intelligence, Tallmadge organized the Culper Spy Ring that included Abraham Woodhull, Caleb Brewster, Anna Strong, and Austin Roe. As a spy, Tallmadge operated under the pseudonym John Bolton and created methods to encode messages. By providing a key to translate messages and using invisible ink from George Washington, letters and messages stayed hidden from unsuspecting eyes.

Following the war, Tallmadge moved to Litchfield with his wife, Mary Floyd, and their seven children. He became involved in many business and political ventures. He served as President of the Phoenix Bank. He was also involved with the Ohio Company, purchasing and selling land in the west.

During President Washington's first term, Tallmadge was given the title of Postmaster for Litchfield. In 1800, he was elected to Congress as a Federalist and remained until 1817.

[more][less]
Quotes:
On February 21, 1824, Tallmadge wrote to his son-in-law, John P. Cushman, regarding a sexual affair between his female house servant and a Litchfield Law School student. He said:

“I do not remember whether I informed you that our black Girl Mary had gone to N. York, where I presume She may commemorate our law School in due time, by exhibiting a Mongrel Mink.”