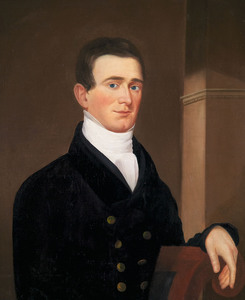 He graduated from West Point before attending the Law School. Afterwards Wolcott pursued a naval career. On January 1, 1818 he was appointed a Midshipman in the U.S. Navy and in May asked to join the Guerriere which was being fitted out. On July 19, 1818 he suffered an attack of typhus fever. On January 27, 1819 he informed the Secretary of the Navy of his recovery and desire to rejoin the Guerriere. Having no further assignment he resigned on March 13, 1819.

He married Jane Lowe Conrad in 1820 whom he met while she was attending the Litchfield Female Academy. The couple wed in Litchfield and the ceremony ...was conducted by Rev. Lyman Beecher. Oliver and Jane had three children. Oliver (1) was born on November 5, 1821, and died less than two years later on March 5, 1823. Oliver (2) was born on September 14, 1823. He died in San Francisco on May 22, 1856, without any children. Elizabeth Stoughton was born on Jult 31, 1825, and died two weeks later on August 15, 1825. Oliver Stoughton and Jane never had any grandchildren. Stoughton died on May 23, 1832, in New York City. He is buried in the East Cemetery in Litchfield (less than a mile down the road from the Historical Society)
[more][less]

Records for the schools were sporadic, especially in the formative years of both institutions. If instructors kept comprehensive records for the Litchfield Female Academy or the Litchfield Law School, they do not survive. Researchers and staff have identified students through letters, diaries, family histories and genealogies, and town histories as well as catalogues of students printed in various years. Art and needlework have provided further identification of Female Academy Students, and Litchfield County Bar records document a number of Law School students. The history of both schools and the identification of the students who attended them owe credit to the early 20th century research and documentation efforts of Emily Noyes Vanderpoel and Samuel Fisher, and the late 20th century research and documentation efforts of Lynne Templeton Brickley and the Litchfield Historical Society staff.
CITATION OF ATTENDANCE:
Catalogue of the Litchfield Law School Hartford, CT: Press of Case, Tiffany and Company, 1849.
Contact Us