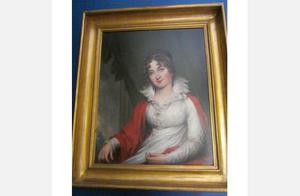 It is believed around the year 1810 she may have the attended the Litchfield Female Academy. On July 2, 1813 she married William Gracie, son of Archibald Gracie (1755-1829), who was a New York City lawyer the builder of Gracie Mansion.

Elizabeth died at Gracie Mansion only six years after they married, on June 26, 1819.
Quotes:
In February 1811, Wolcott wrote the following letter to her uncle Frederick Wolcott asking him to bring a legal case against Litchfield Law School students William Channing Gibbs, Thomas Sowers Aspinwall, and James Gore King for eating pieces of her sister's wedding cake reserved for Sarah Pierce, Sally Burr Reeve, and her aunt Betsey Huntington Wolcott. This letter is considered an excellent parody of legal procedures being studied at Litchfield Law School and shows the familiarity of young women with legal terminology.

Dear Uncle,
I sent by Mr. W. Gibbs a small trunk containing pieces of Laura's wedding Cake, directed to Aunt Wolcott Mrs. Reeve & Miss Pierce ...and with sundry little presents for my Cousins. Instead of delivering the Trunk to Mrs. Reeve as requested, I understand it was opened by Mr. Gibbs Mr. King and Mr. Aspinwall. I have to request you, to order the Sheriff to take up these three young men, who were all concerned in taking the Cake. If they are penitent and make suitable apologies, I am willing they should be pardoned, this being as I wish to believe, their first offence, but if they deny the charge, I request you to detain them in jail, till I can end you Miss Sally Gracie's disposition, who heard Mr. Aspinwall make a full confession. I can prove them guilty, and if they are stubborn I suppose you will sentence them to be punished according to Law. We all join in sending love to you Aunt Wolcott & Cousins.

[more][less]
Additional Notes:
There is an unproven story that Elizabeth died tragically of a ruptured blood vessel only hours after her wedding to William Gracie. However, it seems more likely that she died in 1819. The Rochester Telegraph and the Litchfield Republican (July 1, 1819) newspapers reported on that she died "suddenly" of apoplexy (or a stroke) on the Thursday before, which would have been June 24, 1819.

It is also claimed by some that her ghost haunts Gracie Mansion in New York City.
Education
Years at LFA:
1810
Immediate Family (Why only immediate family?)
Related Objects and Documents
In the Ledger:

Records for the schools were sporadic, especially in the formative years of both institutions. If instructors kept comprehensive records for the Litchfield Female Academy or the Litchfield Law School, they do not survive. Researchers and staff have identified students through letters, diaries, family histories and genealogies, and town histories as well as catalogues of students printed in various years. Art and needlework have provided further identification of Female Academy Students, and Litchfield County Bar records document a number of Law School students. The history of both schools and the identification of the students who attended them owe credit to the early 20th century research and documentation efforts of Emily Noyes Vanderpoel and Samuel Fisher, and the late 20th century research and documentation efforts of Lynne Templeton Brickley and the Litchfield Historical Society staff.
CITATION OF ATTENDANCE:
[We are currently working to update and confirm citations of attendance.]
Contact Us