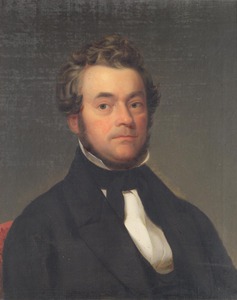 Before graduating from Yale College in 1825, Woodruff attended Morris Academy. After receiving his undergraduate degree, he studied law with James Gould at the Litchfield Law School. In 1827, he was admitted to the bar and traveled to the Ohio Valley in search of a location for a new practice. Discouraged, he returned to Litchfield and opened a law office there instead later the same year.

Woodruff served in various public positions throughout his lifetime, including postmaster of Litchfield from 1832 to 1846. He served ...as Justice of the Peace, a Grand Juror, the town Treasurer, the town clerk, a clerk of the Superior Court, a Colonel in the Litchfield Militia, and the Judge of Probate.

Woodruff also became involved in local and national politics, was a member of the State House of Representatives in 1851, 1866, and 1874. While a state Congressman, he served as the chair of the judiciary committee and was a vital player in the 1875 revision of the statutes.

He was elected as a Democrat to the Thirty-seventh Congress (1861-1863). As a Congressman, he served on the committee on public lands, using his experience to advise on legislation regarding public lands. He lost his re-election bid in 1863 because of his affiliation with the perceived anti-war Democratic party.

Woodruff was also a local historian. In 1845, he authored a History of Litchfield.

In 1829, he married Henrietta Sophronia (Seymour) Woodruff, a Litchfield Female Academy graduate and the sister of Origen S. Seymour, a Law School classmate who in turn married Woodruff's sister Lucy. Woodruff and his wife had two children: George and Henrietta. George C. Woodruff died in Litchfield, CT in 1885 and was buried in the East Cemetery.


[more][less]
Quotes:
"That all classes of people should implicitly trust Mr. Woodruff was natural. That confidence was begotten of an honesty, a faithfulness, a zeal that was unswerving. No better proof of this could exist than the fact that at some time he was not only counsel for every town in Litchfield county but many of the towns in adjoining counties." -- Obitiuary sketch of George C. Woodruff
Education
Years at LLS:
1825
Other Education:
Attended the Morris Academy in the South Farms section of Litchfield, CT and graduated from Yale College in 1825.
Profession / Service
Profession:
Lawyer; Political Office
Admitted To Bar:
Litchfield, CT in 1827
Political Party:
Democrat
Federal Posts:
U.S. Representative (CT) 1861-1863
State Posts:
State Representative (CT) 1851, 1855, 1874
State Committees:
Clerk of the CT General Assembly.
Local Posts:
Postmaster (Litchfield, CT) 1832-1846
Justice of the Peace (Litchfield, CT)
Grand Juror (Litchfield, CT)
Treasurer for the Town (Litchfield, CT)
Clerk for the Town (Litchfield, CT)
Clerk of the Superior Court
Judge of Probate
Immediate Family (Why only immediate family?)
Related Objects and Documents
In the Ledger:
Other:
Litchfield area family papers, 1794-1860
Litchfield County, Litchfield County Court Records by Subject: Admissions to the Bar

Records for the schools were sporadic, especially in the formative years of both institutions. If instructors kept comprehensive records for the Litchfield Female Academy or the Litchfield Law School, they do not survive. Researchers and staff have identified students through letters, diaries, family histories and genealogies, and town histories as well as catalogues of students printed in various years. Art and needlework have provided further identification of Female Academy Students, and Litchfield County Bar records document a number of Law School students. The history of both schools and the identification of the students who attended them owe credit to the early 20th century research and documentation efforts of Emily Noyes Vanderpoel and Samuel Fisher, and the late 20th century research and documentation efforts of Lynne Templeton Brickley and the Litchfield Historical Society staff.
CITATION OF ATTENDANCE:
LHS Papers of Agatha Ryan, # 1986-97; “Recd. Sept 22 1827, of Morris Woodruff Esq One Hundred & Thirty Dollars, in full for the tuition of his son George, in my Law School. James Gould”; Catalogue of the Litchfield Law School (Hartford, CT: Press of Case,
Secondary Sources:
"Obituary Sketch of George C. Woodruff." Printed in the Connecticut Reports, Vol. 54, p. 596 - 598. http://www.cslib.org/memorials/woodruffg.htm
Contact Us