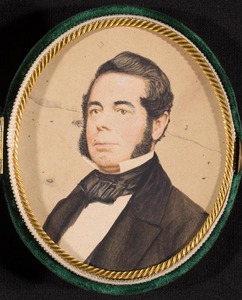 Brace studied military and medical subjects at Williams College. He returned to Litchfield where he attended the law school and in 1814, became a teacher at the the Litchfield Female Academy. He eventually became the head of the school, and remained there until 1832. When the Litchfield Female Academy was incorporated in 1827, he became Secretary of the Board of Trustees. In 1832, Brace moved to Hartford, Connecticut where he acted as the head of Catherine Beecher's Hartford Female Seminary for the next fifteen years. He then taught at an ...academy in New Milford, Connecticut for several years until he undertook the editorship of the Hartford Courant newspaper in 1849. Brace worked as the editor until he retired to his family home in Litchfield at the age of 70 in 1863.

In addition to being a premier educator of his time, Brace was also a poet and the author of two novels. Brace married twice. The first marriage was to Litchfield Female Academy student Lucy Porter. Their son Charles Loring Brace was the author of many books and was the founder of the New York City Childrens' Aid Society. Brace's second marriage was to Louisa Moreau of Hartford. He died during his retirement years in Litchfield.
[more][less]
Quotes:
"I was lazy to dance so few girls there that almost all were belles." He "danced volunteers" with several girls and danced twice with Sarah Sanford, "marched with her and waiter upon her down to supper."

Emily Noyes Vanderpoel, More Chronicles of a Pioneer School from 1792 to 1833, Being an Added History on the Litchfield Female Academy Kept by Miss Sarah Pierce and Her Nephew, John Pierce Brace Hardcover (1927) p.112.

"...all the school almost" attended a cotillion party on the evening of Militia Day.
John Pierce Brace's journal, 1814

"Their stage was in true theatrical style and their scenery elegant."

Regarding ...the Litchfield Law School's 1815 productions of "The Rivals" and "Wags of Windsor," which were attended by Litchfield Female Academy students.

Of Litchfield Female Academy student Eliza Johnston of Savannah, GA, whom Brace had a crush as a young man but lost to the Litchfield Law School's older admirers:

Tall, graceful, and charming my Eliza stood;
Like some tall pine within the neighboring wood.
She return'd my love, and then I thought
I'd gained the bliss which I so dearly sought.
But, alas! my days of bliss are over:
For now I find she is a fickle lover.
She went from me to twenty more;
And now she loves as much as half a score.
Bard, Virgil, Robert, and twenty more;
Charles, Elijah, Henry. Lord! I could name a score.

In a journal entry from 1814, John scoffed at Cornelia Leonard who, had been a leading student at Litchfield Female Academy but, “studied Tom Perkins more than anything else and permitted Miss Bradley to get above.” Cornelia and Tom ultimately married in 1818.


[more][less]
Additional Notes:
On April 13, 1819, Catharine Beecher wrote to Samuel Foote about a planned trip to Maine and Boston with her “mother’s sister Lucy” [Porter] and her upcoming nuptials to John.

“She is a lovely girl about my age & has spent the winter here. She will be married next fall to Mr. John Brace & will settle here which will be a great comfort to mama & all of us…"

Records for the schools were sporadic, especially in the formative years of both institutions. If instructors kept comprehensive records for the Litchfield Female Academy or the Litchfield Law School, they do not survive. Researchers and staff have identified students through letters, diaries, family histories and genealogies, and town histories as well as catalogues of students printed in various years. Art and needlework have provided further identification of Female Academy Students, and Litchfield County Bar records document a number of Law School students. The history of both schools and the identification of the students who attended them owe credit to the early 20th century research and documentation efforts of Emily Noyes Vanderpoel and Samuel Fisher, and the late 20th century research and documentation efforts of Lynne Templeton Brickley and the Litchfield Historical Society staff.
CITATION OF ATTENDANCE:
Baldwin, Roger Sherman. Notes on law taken from the lectures of the Honble. Tapping Reeve and James Gould, esquire … at the Litchfield Law School, 1812-1813 Rare Book Collection, Lillian Goldman Law Library, Yale University.