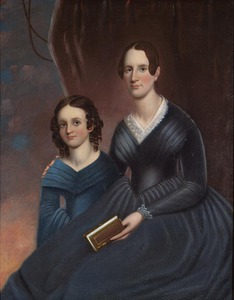 Other Name:
Jane Maria Seymour
Gender:
Female
Born:
March 7, 1811
Died:
1868
Home Town:
Litchfield, CT
Marriage(s):
Josiah Gale Beckwith (February 7, 1831)
Biographical Notes:
Jane Seymour Beckwith, daughter of Moses Seymour, Jr. and his wife Mable Strong Seymour of Litchfield, Connecticut, was born March 7, 1811. From 1824-1828 Jane studied at Sarah Pierce's Female Academy in her hometown. Her paternal grandfather Major Moses Seymour was a subscriber to the Litchfield Female Academy in 1798. Three years after completing her education she married Josiah Gale Beckwith, and the couple had five children during their marriage. She and her husband lived in the Moses Seymour, Jr. house on South St. in Litchfield. The house had been built by her father in 1817.
Additional Notes:
Primary sources for Jane Seymour Beckwith include an autograph album located in the Litchfield Female Academy collection, Series 2: Student Papers, Records, and Documents, Folder 9.
Education
Years at LFA:
1824-1828
Immediate Family (Why only immediate family?)
Related Objects and Documents
In the Ledger:

Records for the schools were sporadic, especially in the formative years of both institutions. If instructors kept comprehensive records for the Litchfield Female Academy or the Litchfield Law School, they do not survive. Researchers and staff have identified students through letters, diaries, family histories and genealogies, and town histories as well as catalogues of students printed in various years. Art and needlework have provided further identification of Female Academy Students, and Litchfield County Bar records document a number of Law School students. The history of both schools and the identification of the students who attended them owe credit to the early 20th century research and documentation efforts of Emily Noyes Vanderpoel and Samuel Fisher, and the late 20th century research and documentation efforts of Lynne Templeton Brickley and the Litchfield Historical Society staff.
CITATION OF ATTENDANCE:
Jane kept an album while atteding the Female Academy (Litchfield Historical Society - Litchfield Female Academy collection).