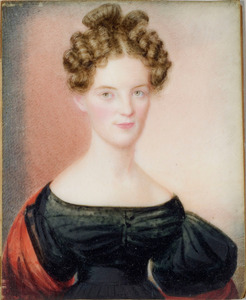 From 1814-1816 her parents, Frederick and Betsey Huntington Wolcott, sent her to Sarah Pierce's Female Academy in her hometown to study. Prior to attending the Litchfield Female Academy, Mary Ann was a student at Betsey Collins' school in Litchfield. Several years after completing her studies Mary Ann married Asa Whitehead in 1827. Asa, originally from Newark, New Jersey, was a lawyer.
Additional Notes:
In 1820, Mary Ann was romantically attached to Litchfield Law School student Henry Walter Livingston, whose family belonged to the old NY grant, Manor families (considered the closest thing to “aristocracy in the US”). Despite Mary Ann's own distinguished background, it didn't meet the Livingston family's marital criteria and Henry ultimately ended the relationship. This caused a stir in the community and many students weighed in on the breakup via journal entries and letters.

Upon Henry’s arrival at Litchfield Law School, fellow student George Younglove Cutler wrote that Henry saw Mary Ann (his first glance of her?) and fellow student "Hannah L" from his window at Tapping Reeve’s house and remarked, “I suppose these young ladies i.e. the ladies of this village -- depend upon law ...students for their husbands -- I will be very careful they do not ensnare me.”

Within three weeks, Henry was “engaged” to Mary Ann:

“Since I wrote to you there have been several new engagements in this place. Mary Ann Wolcott is engaged to Mr. Henry Livingston a very elegant man in appearance with two hundred thousand dollars and Lord of the Manor. He is not overstocked with sense but sufficient to please her, what a satirical remark.”

William replied to Abigail on July 13, 1820 that the engagement only proved love was irrational and unpredictable. Evidently a long engagement was planned, which raised a red flag for William: “You ask me if I think Miss M ___ W’s ___ sentiments capable of constancy for two long years. I confess I should doubt it if there happened an occasion for her changing them. ...If they love each other sincerely now, they had better tie the knot as soon as possible.”

George Younglove Cutler wrote in his “Journal” dated September 2, 1820:
“Engagements are dangerous affairs -- ‘reason’ & love take little company together now-a-days -- love easily takes possession of a man, but an engagement connected with delay is apt to cool it & when the passion is moderated, it is easily ousted by reason -- & too often by something which ought to have less effect than reason.”

Emily Noyes Vanderpoel, Chronicles of a Pioneer School from 1792 to 1833: Being the History of Miss Sarah Pierce and her Litchfield School (1903) p.197.

Cutler believed “it was probably the interference of friends who have caused the mishap” between Livingston and Mary Ann and that "avarice" was prejudice against her economic and social standing. “...[T]hat is a very dishonorable reason considering his already monstrous estate... if I was an Emperor I would hang such a man.”

Emily Noyes Vanderpoel, Chronicles of a Pioneer School from 1792 to 1833: Being the History of Miss Sarah Pierce and her Litchfield School (1903) p.197.

It was also rumored that Livingston rejected Mary Ann as vengeance. Cutler wrote: “Hunt Stone surmises that L. cheated M.A.W. to revenge an insult of that kind once offered to one of his Uncles by one of her Aunts.”

Emily Noyes Vanderpoel, Chronicles of a Pioneer School from 1792 to 1833: Being the History of Miss Sarah Pierce and her Litchfield School (1903) p.203.

According to Culter, Tapping Reeve said that if gossip of Livingston “disappoint[ing] 6 ladies” prior to Mary Ann was true that “the wretch ought to be prosecuted.” In this period lawsuits could be brought against men who broke engagements. Cutler believed Frederick Wolcott should sue Livingston. He wrote, “M.A.’s feelings may be nice upon the point but her delicacy ought not to prevent his punishment especially since her family is not rich.”

After the “cruel affair,” Culter said Livingston was leaving for France and wrote “It has been reported that L. says ‘he will go to Europe with a light heart.”

Emily Noyes Vanderpoel, Chronicles of a Pioneer School from 1792 to 1833: Being the History of Miss Sarah Pierce and her Litchfield School (1903) p.198.

Elizabeth Wolcott suggested it was Livingston, “the Baron,” who was in pursuit of her sister and that Mary Ann had not courted his attention. In 1825, she wrote her fiancé and Litchfiled Law School student John P. Jackson:

“And so the poor Baron has been pouring forth his grief to you...I suppose we have sunk sadly in his estimation for slighting so much worth! I do indeed feel quite sorry his feelings are so much wounded, but his attentions were so troublesome in our family it became necessary to give him some hint for our own comfort. We could seldom walk in the streets unless he joined us; but he appeared particularly to single Mary Ann out as the subject of his attentions, & when any ride or walk was proposed, he always intruded his company upon her, sometimes even when his name was not mentioned in the invitation, & this gave rise to remarks by no means agreeable to her.”

Elizabeth remarked that Livingston felt slighted when he wasn’t invited to a tea the sisters gave at their house.

Fanny Lord, in her November 11, 1899 reminisces of the Litchfield Female Academy, noted that after the jilting of Mary Ann by Livingston “parents were even more careful as to any attentions paid to their daughters. Sometimes they even went so far that if a young man called three times on on one of them they would ask his intentions.”

Emily Noyes Vanderpoel, Chronicles of a Pioneer School from 1792 to 1833: Being the History of Miss Sarah Pierce and her Litchfield School (1903) p.289.

In 1823, Livingston married Caroline de Grasse de Pau in France. She was the granddaughter of the fabulously wealthy Comte de Grasse, who had been the commander of the French Fleet during the decisive battle at Yorktown in the American Revolution.

[more][less]
Education
Years at LFA:
1814-1816
Immediate Family (Why only immediate family?)
Related Objects and Documents
In the Ledger:

Records for the schools were sporadic, especially in the formative years of both institutions. If instructors kept comprehensive records for the Litchfield Female Academy or the Litchfield Law School, they do not survive. Researchers and staff have identified students through letters, diaries, family histories and genealogies, and town histories as well as catalogues of students printed in various years. Art and needlework have provided further identification of Female Academy Students, and Litchfield County Bar records document a number of Law School students. The history of both schools and the identification of the students who attended them owe credit to the early 20th century research and documentation efforts of Emily Noyes Vanderpoel and Samuel Fisher, and the late 20th century research and documentation efforts of Lynne Templeton Brickley and the Litchfield Historical Society staff.
CITATION OF ATTENDANCE:
"Rules for the School and Family" and Names of the Young Ladies belonging to Miss Pierce's School in the Summer of 1814 (Litchfield Historical Society - Litchfield Female Academy Collection).