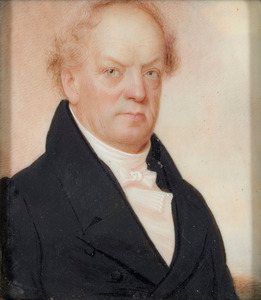 In 1786, Frederick graduated from Yale. The following year he got his law degree from the Litchfield Law School. Illness, however, prevented him from practicing law right out of school. Instead of pursuing his own law practice, Frederick was Clerk of the Common Pleas. He followed that job by moving up in 1798 to become the Clerk of the Superior Court in Litchfield County. Afterwards he was appointed a Judge of Probate, a position he held until he retired from public life.

In June of 1805, Oliver Wolcott, Benjamin Tallmadge, and Frederick Wolcott signed ...an agreement to finance four successive voyages to China, beginning in the spring of 1806. Shares in the venture were later purchased by local merchant Julius Deming. Oliver Wolcott procured the Trident, a nearly new vessel, to carry out the trade. Goods they imported were also sold in Litchfield, as well as by Belden, Dwight, & Company of New Haven. The Embargo Act of 1807, which remained in effect until 1809, raised concerns about foreign trade which pervaded the endeavor. In April of 1809, Oliver Wolcott announced to his brother, “…we have concluded to send out the Trident with a moderate Investment & to close the existing concern with the depending voyage.”

Frederick did a lot of his business with his brother, Oliver Jr. They owned the Wolcottville Manufacturing Company which manufactured woolen cloth, and they imported sheep and cattle.

Wolcott married twice. He and his first wife had four daughters and two sons. Two of those daughters married Litchfield Law School graduates. Wolcott and his second wife had two daughters. He died in Litchfield, CT at the age of sixty-nine.

Quotes:
"I have been dancing all the forenoon, and my hand trembles so, I can hardly write intelligibly. We dance again this evening; and we all wish for your company. Meantime, you are poring over some antiquated subject, that is neither instructive nor entertaining. You cannot say so of our dancing; it is 'an amusement that profits the mind.'"

Records for the schools were sporadic, especially in the formative years of both institutions. If instructors kept comprehensive records for the Litchfield Female Academy or the Litchfield Law School, they do not survive. Researchers and staff have identified students through letters, diaries, family histories and genealogies, and town histories as well as catalogues of students printed in various years. Art and needlework have provided further identification of Female Academy Students, and Litchfield County Bar records document a number of Law School students. The history of both schools and the identification of the students who attended them owe credit to the early 20th century research and documentation efforts of Emily Noyes Vanderpoel and Samuel Fisher, and the late 20th century research and documentation efforts of Lynne Templeton Brickley and the Litchfield Historical Society staff.
CITATION OF ATTENDANCE:
Litchfield County Bar Association Records, 1800, Litchfield Historical Society, Helga J. Ingraham Memorial Library.
Secondary Sources:
Dexter, Franklin Bowditch. Biographical Sketches of the Graduates of Yale College with Annals of College History, Vol. 4. New York; Henry Holt and Company, 1907.
Contact Us